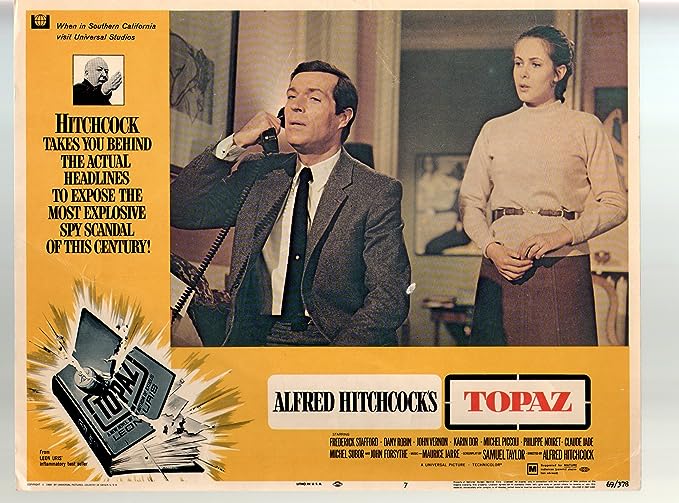 #51 in my Ranking of Alfred Hitchcock’s films.

By about the halfway point, Topaz had completely lost me and never got me back. The overstuffed and unfocused international spy story of Frederick Stafford’s Andre Devereaux, French secret agent, lurches from one storyline to another with only tangential connective tissue, creating an overlong drag of a film that feels quite unlike anything Hitchcock had ever made before. That the titular Topaz spy ring isn’t actually important until the two-thirds mark is indicative of the movie’s simple inability to understand what story it wants to tell. I think I tend to latch onto behind the scenes stories of Hitchcock being bored or disengaged when it helps explain poor films (though he was often described as bored on set as a side-effect of his levels of preparation going into production), but the information that Hitchcock was forced into this by the studio and they never had a completed script feels all too right for the problematic film we ended up getting as Hitchcock’s third to last film ever.

The problems start from the very beginning. Apparently trying to reclaim something he felt was important to his movies from the silent era, Topaz begins with an extended cat and mouse game involving some Russians in Copenhagen. It’s a slickly produced and assembled sequence, but it’s emotionally empty because we don’t know the players involved beyond some basic things like “High Ranking Soviet Official” and “His Wife” and “His Daughter”. We end up getting introduced to a bevy of characters that don’t really matter much, and it dominates the first half hour or so of the film. Our main character, though, is Andre Devereaux, the French secret agent working out of DC with a working relationship with the American agent Mike Nordstrom. Nordstrom is part of the interrogation of the Russian official and has heard about something called Topaz, but the Americans are more interested about what Cuba and Russia are doing right then in 1962.

Now, one of my major problems with the film is how episodic it feels and how unrelated major sections are from everything else. It would have been relatively easy to tie the existence of Topaz to Nordstrom asking Devereaux for help in finding out what’s going on in Cuba, using it as payment for Deveraux’s services, but Topaz is only mentioned once in the entire first hour and a half of the film. Deveraux’s trip to the Cuban delegation in New York and then to Cuba itself dominate the middle hour of the film, and when we get to the final act, none of it matters. We’ve switched out antagonists from a Cuban (John Vernon, chewing up the scenery) to a circle of French spies and there’s no connection between them. The French spies aren’t getting information from the Cuban or anything, Deveraux just finishes his adventure in Cuba and starts another in Paris. There’s a thin reed of connection because Deveraux gets sent back to Paris because his actions in Cuba weren’t sanctioned by the French intelligence apparatus, but that’s the sort of thing you start a story with, not use as a bridge from the second to third acts.

Because there end up being so many individual episodes, even considering its extended runtime of two hours and twenty minutes (Hitchcock’s longest films), characters get thinned out to caricatures. Deveraux himself gets the most screen time, but he feels like a generic spy without anything interesting about him. His contact in Cuba, Juanita, never moves beyond strong Hispanic woman. The antagonists, especially the Cubans, are all thin, though the late introduction of Jarre gives us a decent bad guy, concerned about being found out, though it’s far too little too late.

And that’s ultimately the problem, the real story of the film is the final forty minutes or so. The first hour and a half is something else that doesn’t matter. It feels like the adaptation of two books in a series rather than the adaptation of a single novel. Now, I’ve never read the source novel by Leon Uris, but I have a strong suspicion that it’s not a classic of the spy genre.

I have read, though, that this is another movie that Hitchcock was forced to make for contractual reasons. I’ve also read that they never had a completed script and the final screenwriter Samuel Taylor (who also wrote Vertigo) was delivering scenes hours before they were filmed. There are three existing endings for the film as well, telling me that this was a heavily compromised production without a strong hand at the helm. Hitchcock didn’t seem to care, and he largely just filmed what he got. He didn’t get the opportunity to actually work through the story like he should have. However, Hitchcock was simply too good a filmmaker for the film to be completely worthless. It’s lensed correctly and has some striking images here and there. There’s one image of Juanita in her purple dress falling to the black and white tiled floor of her house that’s often used in montages of Hitchcock’s work because of the dress pools beneath her like blood, and there’s no denying that it’s a striking image. It’s just the culmination of a storyline that never really works and doesn’t actually matter that much to the overall narrative.

It’s an overlong, uninvolving mess of a film. It’s several stories that happen to involve some of the same characters squished together. It’s a drag, but at least it looks pretty good.