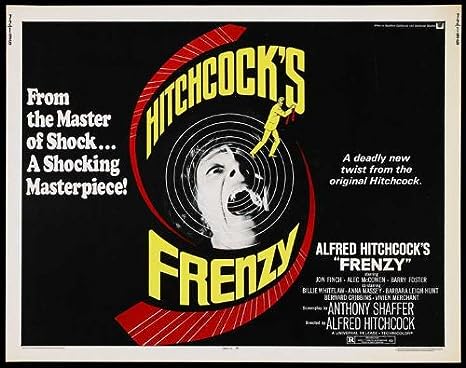 #24 in my Ranking of Alfred Hitchcock’s films.

After the poorly received Torn Curtain and Topaz, Hitchcock returned home to both the murder genre and to Covent Gardens in London to film Frenzy, a lurid tale of a serial killer and the man caught up as the prime suspect. The only feeling of new from the film comes from the use of nudity and a particular focus on the real killer, and yet it’s still a solidly built thriller, the sort of thing that Hitchcock could seemingly do in his sleep.

There’s a killer on the loose in London, and he has a trademark in that he rapes his female victims and then strangles them with a necktie. In the city is Dick, a former RAF pilot who’s had a hard time of it since he left the service, going from job to job and recently divorced. He starts the movie by taking a drink from the pub where he works and immediately getting fired despite his protestations, and the support of his girlfriend Babs, that he was going to pay for it. Without a job, Dick goes to his ex-wife for some kind of support, which he gets through dinner and twenty pounds that she slips into his pocket without his knowledge.

Later, Dick’s friend Rusk shows up to Dick’s wife’s office, a matchmaking service, and demonstrates for the audience, in rather shocking detail, how he is the necktie killer. Now, the reveal of the identity of the serial killer is an interesting twist on the genre. We see Dick and Rusk interacting at several points, events that tell the audience of the danger Dick is putting himself into while he doesn’t realize it himself. It’s a new version of the tried and true method of creating tension. The other interesting thing about the early reveal is that about half of the movie is from Rusk’s own perspective, including the movie’s best single sequence.

Rusk has murdered another girl and shoved her body into a potato sack onto a truck. As he returns to his apartment, he realizes that he’s lost his pin and that the girl had grabbed onto it. He needs to get back to the body and retrieve the pin, but as he’s hiding in the back of the truck, the driver comes and drives off. Rusk has to negotiate the logistics of hiding in the back of a potato truck while digging out a corpse, breaking the fingers on the right hand because of rigor mortis, retrieving the pin, and then getting out again. I can imagine Hitchcock laughing himself silly as he conceived of the scene (not shooting, it seemed like a nightmare to shoot). It’s such a twist on the sort of sequence where the bad guy, who’s already done the bad dead, is trying to get out of trouble, and the filmmaking is so effective that the audience is along with him, not really cheering him on, but instinctively sharing the same concerns as him.

Another wonderfully amusing aspect of the film, which feels a little disassociated from the rest and gives some pause in terms of praise, is the chief inspector on the case and his wife. The film uses two dinners as springboards for the inspector to explain the police’s position at two different points in the film, and instead of just straight exposition the scenes are played out as the wife brings out the most bizarre dishes that look completely inedible. However, since the police inspector is such a polite British man of good manners, he finds ways to get around eating the food he obviously has great distaste for, one of which made my wife cringe audibly as he did it. They’re two of the most purely entertaining scenes of exposition in Hitchcock’s filmography.

So, yeah, I like it. I do feel like it’s a return to form after Topaz, though I seem to like Torn Curtain more than most so it’s not like some sort of great gap of quality. One of the drawbacks of the film’s approach to treating the two characters, the criminal and the falsely accused, with equal measure is that they end up a bit thinner than they otherwise could be. Dick, in particular, feels like a generic Hitchcock protagonist rather than a strongly written character, especially after the first act when the focus on the actual crimes gets taken up.

It’s a gripping little murder thriller set in Alfred Hitchcock’s old stomping grounds with some wonderful sequences. It seems to have been a bit overpraised contemporaneously, but that doesn’t detract from the fact that it’s still a solidly good film.