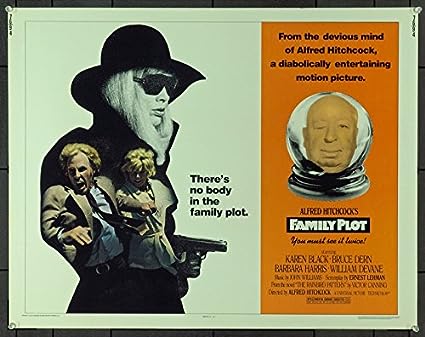 #29 in my Ranking of Alfred Hitchcock’s films.

We come to it at last, Alfred Hitchcock’s fifty-third completed and unlost film that is also his last ever made. From 1925’s The Pleasure Garden to 1976, he made movies that cinema will never forget, and like many great filmmakers, he went out without hitting the same highs he had hit before. That’s not to say that Family Plot is at all bad. It’s a fun little twist of a movie with some winning performances, and it’s certainly a better way to go out than Billy Wilder did with Buddy Buddy.

The story revolves around two couples on the wrong side of the law. The first is a fake mystic, Blanche, who uses the investigative talents of her actor/cab driver boyfriend, George, to find ways to bilk old ladies out of money. With one particularly wealthy one, Julia Rainbird, they discover that she has a long lost nephew and will pay Blanche $10,000 to find him, which they set out to do. The other couple are Fran and Arthur, a pair of kidnappers who exchange their victims for expensive diamonds. The laws of economy in storytelling make it pretty obvious from the start that Arthur is going to end up being the long lost nephew, Edward Shoebridge, and that ends up dragging down the movie’s first hour or so.

We watch as Blanche and George slowly catch up to where we are, since they’re given the bulk of screen time, and it ends up feeling like not enough is happening when they’re on screen. They’re behind on the plot while Fran and Arthur move things forward by plotting and executing another kidnapping (of a bishop). This major half of the film ends with Arthur getting the man who helped him fake his own death and kill his adoptive parents try to murder Blanche and George. He cuts their brakes, which ends up sending them down a twisty road down hill at high speeds that they barely escape from with their lives. What helps buoy all this is the simple nature of Blanche and George, never really assigning the events much importance when it comes to Arthur, and just continuing onward with little concern.

It’s when the two main plotlines finally converge, after several close calls, that the movie moves into something far more entertaining. The movie had taken its time to set up all the pieces, getting us to know the four characters well and what each wanted, so that when all four are thrown together, their diametrically opposed goals clash and it all makes really entertaining sense. When Blanche confronts Arthur, wide-eyed optimist that she is and with good news that he had come into a fortune, Arthur is convinced that she’s figured out their kidnapping scheme and is working to blackmail him. That she’s not is a nice surprise, but Arthur and Fran were in too much of a rush putting the bishop in the car to do it quite right. The bishop’s bright red cloak is sticking out of the car, and the effort to fix it suddenly sends everything wrong once again. It’s when George shows up later that things get ramped up.

An interesting thing about the narrative is how the two groups evolve in the mind of the audience. They’re both sets of crooks, one kidnappers and the other small time fraudsters, but as the movie goes along, we definitely align with one over the other (Blanche and George). The other couple (Fran and Arthur) get progressively worse as the movie goes on, and that’s largely hinging on the performance of William Devane as Arthur. He is a fantastic mix of creepy and slimy and charming all at once. As he gets more and more paranoid about the couple he can’t explain in any other way than they’re onto him, he so easily drifts into violent solutions. The contrast with how Bruce Dern as George and Barbara Harris as Blanche are so blithely unaware of whom they’re trying to get involved with is kind of wonderful.

Family Plot is a fun, winking way for Hitchcock to leave the cinematic stage. It may not be his Ran, but it shows that the man was still adept enough to put together an entertaining film that never quite takes itself very seriously. With solid performances, especially from Devane, there’s a lot of enjoyment to be had.