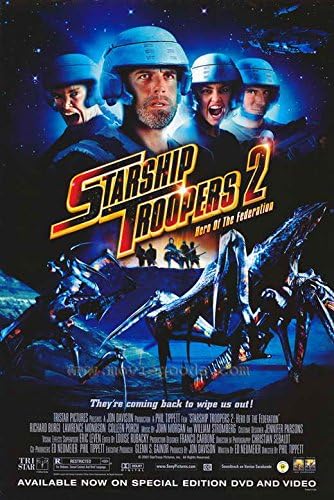 Let me just start by saying that the first Starship Troopers sequel is bad. It is not good, and it’s not really questionable. However, I wouldn’t be writing about a little known movie, a direct to video sequel to a large science fiction movie that gained a cult following over the years, if it were just bad. There’s nothing particularly special about that pedigree to merit this kind of attention, however there’s something about the movie that does deserve some attention.

I actually remember when this was first announced, and I had some excitement about the prospect. It was all for a single reason, the movie was written by Ed Neumier, who wrote the first Starship Troopers movie. It may have had a small budget, a no name cast, and go straight to direct video, but the writer should have a firm handle on what made the original successful. It’s gotta be worth something. The interesting thing about the film is that’s partially right. There are tastes of the same tone and ironic treatment of propaganda as the original, and those are the moments that work best. There’s also something that should have happened in the third act of the original in the introduction of a new kind of bug (that Paul Verhoeven and Ed Neumier both wish they had done in their commentary track of the original).

However, these small bits of interesting are lost in the actual bulk of the film. It really starts at the beginning where the production team really tried to stretch its budget and did it poorly. A group of Mobile Infantry are on a high rise fighting back a horde of bugs, but they’re getting overrun. Well, they say they’re getting overrun, but they’re rarely in the same shot as the bugs so it feels like a disconnect between medium shots and wide shots. It also looks really cheap, obviously filmed on a set in as much darkness as they could get away with while also being a rather flat image without any real depth because there’s nothing behind anybody but blackness. The action moves to a remote outpost in disrepair, and I had visions of a movie with much better understanding of the limits of its budget where it actually started in the bunker as one of the psychic characters struggled to act as the voices of those being torn apart by the bugs on their run to the outpost eat at him/her. It would have conveyed the same amount of information that the more expensive and visually unimpressive opening currently in existence successfully conveys. As it is, it’s supposed to introduce several characters, but all but one are wearing helmets in the dark so it’s hard to make them out.

Once the action gets to the outpost, it felt like things might get better. There’s an extended shot as the troops move further into the outputs lit only by a bright white flare that’s actually quite evocative, but it quickly gives way to more flat, shadowless views that feel incredibly artificial and unhelpful for the kind of movie they’re trying to make. It’s essentially a remake of The Thing in the Starship Troopers universe, which I have no problems with in general. There’s a new kind of bug that implants in people’s heads and takes over. The problems are that there are too many characters so it’s far too easy to get lost in the sea of faces and the bug possession is never really the focus. There’s no real focus. The story is all over the place with the titular Hero being locked up in the outpost before everyone else arrives, and his connection to the bug, which should have been pretty much front and center, largely ignored and forgotten until the very end. There’s also an electrified fence that needs fixing, comms equipment that needs mending, several different couples that develop and a fair amount of sex all with characters that never get any depth. It’s shallow and unfocused.

And yet, that new bug idea isn’t bad, and the design is actually rather good, and the way the movie ends is something that feels just so in line with how the first movie approached the material. In the final escape from the outpost, the Hero makes his last stand helping his fellow soldiers flee, not out of any love for the cause, in fact he hates the cause and the Federation in general. And yet, he becomes the Hero of the Federation, his example and likeness used on recruiting posters in big displays of support for the war against the bugs. The final line of dialogue that a newborn baby needs to grow up to be more meat for the meat grinder is even better.

No, it’s not good by any measure, but the spirit of the original Starship Troopers does peek out from time to time to remind people of the far superior original. The characters are thin and poorly drawn, the terror unconvincing, and the special effects sub-par. They didn’t understand how to properly use their limited budget, wasting a large chunk on an opening battle that is both unintelligible and ugly. And yet, I can’t hate it. In fact, I want to like it more than it deserves, but then I remember the long stretches of boring nothing that dominate the movie and the urge dies away.