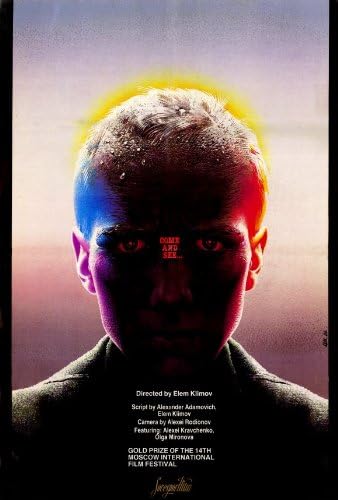 There is a very specific historical moment that this film is evoking explicitly, the Nazi rape of Belorussia in the Second World War. The director, Elem Klimov, obviously internalized the violence visited upon the common people of the Soviet Union. Knowing that Soviet filmmakers often used Nazis as stand ins for their contemporary Soviet rulers, there may be an effort to attack them at the same time. However, it’s obvious that the actual events in Belorussia are the central point of anger.

In some structural ways, this evokes All Quiet on the Western Front a lot. Both are about young men eager to join in the fight of a war and then being confronted with the harsh realities of war. The biggest difference is the execution of the idea where Come and See recreates the logic of a nightmare for two hours and twenty minutes.

This is more of an experience than a straight story, focusing more on the physical and emotional reality of several days under a brutal Nazi occupation than on typical story elements. The story elements are all there, for sure, though. There’s a focus on characters and the effect these events have on them. There’s plot as the main character Flyora walks through and around the actions of partisans against the occupying force. It’s just that the actual experience that Flyora has, the traumatizing events that he witnesses and ages him horribly over the course of a few days, is the point.

The movie begins with Flyora looking for a rifle amongst the remains of equipment left behind by some German soldiers on a beach. He needs that rifle because he can’t join the partisans without one. He looks so young and wide-eyed in these scenes. There with another boy and knowing how his face ages by the end of the movie, I actually had trouble positively identifying Aleksey Kravchenko as the same actor who ends the film as Flyora. His mother understands the kind of hardship Flyora will be leaving her in if he goes, begging, pleading for him to stay. And yet off he goes to the camp where he gets the worst duties like cleaning out the cooking pot (while inside it with a fire burning to keep the cleaning water warm) and has to give up his boots to an older partisan and gets left behind when the ramshackle battalion moves out.

It’s here that Flyora meets the other most prominent person in the film, Glasha, a pretty young girl who has tagged along with the battalion, mostly attached to their leader, a stern faced fighter, and has also been left behind. This section of the film reminds me of Terrence Malick’s common motif of Eden in his films, a respite, natural escape from the hardships of the real world and sin. The two connect through their shared disappointment at being left behind and end up, for a few moments, dancing in the rain (with rainbows captured in frame at the same time) before it comes crashing down by a bombing run that destroys the battalion’s forest base of operations, demonstrating that there is going to be no safe place in this conflict.

Running through the plot isn’t entirely useful to analysis, but it essentially amounts to Flyora going deeper and deeper into Hell. He goes home to find his family missing (only Glasha sees the pile of bodies on the side of his house). His insistence on holding onto his rifle sends him on a mission to find supplies, but everyone ends up dying, including the cow they stole from a local farmer, and he’s trapped in the middle of a firefight with bright red tracer bullets flying inches over his head (really, it happened in real life during filming). He ends up in another small town as Nazis shows up, rounding up the townspeople into a common building, and burning it down (a representation of one of the more than 600 towns that Nazis did this to, according to text on screen late in the film).

As Flyora moves through these different events, they seem to carry the logic of moving from one aspect to another in a nightmare. I was reminded of Stanley Kubrick’s Eyes Wide Shut in many ways as the main character seemed to drift from one related event to another, picking up and dropping off characters along the way, often without much explanation. The two major visual techniques, portrait focuses on people’s faces, and roving Steadicam shots through scenes, feel dreamlike in their embrace of a certain surrealism. How individual events just get worse without ever getting better feels like being trapped in a nightmare that one simply can’t escape from. And that’s the overall effect of the film, this sort of descent into the horrors of a nightmare that you can’t escape.

Everything that Flyora sees is a nightmare. Everything happening out of sight is also a nightmare. His natural escape from his first taste of war in camp is destroyed by explosions and fire. His home is desecrated with the corpses of his family and other villagers. The liberators, as the Nazis call themselves in propaganda blasted out of speakers in Russian to the locals, are monsters who parade through Belorussia like drunks on a crawl, long since divorced from their sober senses and just acting upon their most cruel of impulses. What ends up making this very stark example of morality play out is the movie’s final moments.

Having been on just the outskirts of the big conflict, Flyora stands alone as the partisans begin to march off. Confronted with a portrait of Hitler calling him a liberator, Flyora stands over it and fires the first shots from his rifle in the entire film, unloading his clip into the glass and paper in an impotent sign of rage in response to the horrors he’s lived through and witnessed. As he does so, Klimov uses stock footage of the remnants of death camps, the survivors, the victims, the Nuremburg rallies, and the war as it plays backwards. As the footage rolls back in time, it feels like Flyora is trying to undo the horrors of Nazism with his gun, but when he’s done, he’s left spent. His family is still dead. That girl still got gang raped. That village was still burned to death. What is he to do? He runs and catches up with the partisans, determined to fight. It’s not that war is hell, it’s that what Belorussia had to endure was hell and the fight to undo it until the Great Victory. The fight was horrible, but it was necessary.

On the Criterion release of Come and See there’s a feature with Roger Deakins, the cinematographer, where he discusses the film in general, how it’s one of his favorites, and his take on some of the specific techniques used in the film’s cinematography. It’s not deep stuff, providing a nice and easy to digest summary of his thoughts, but I think it was actually quite helpful in getting me to understand some of the visual tricks, particularly the use of the Academy ratio and portraiture. I often assume that the Academy ratio is used now as a way to create a claustrophobic atmosphere since there’s little escape from the focus of the frame. I do think that’s true of Come and See, though Deakins doesn’t mention it, but what he does talk about is the use of the portraiture and how it focuses the audience on the subject in frame with no where else for the eye to wander. I wish it were available on Youtube.

Anyway, Come and See is horrifying in the best way. It drops you in a specific time and place and instills the emotions it wants in the audience with such precision that it’s beautiful in its ugliness. It really is one of the greatest movies made in the Soviet Union.

2 thoughts on “Come and See”