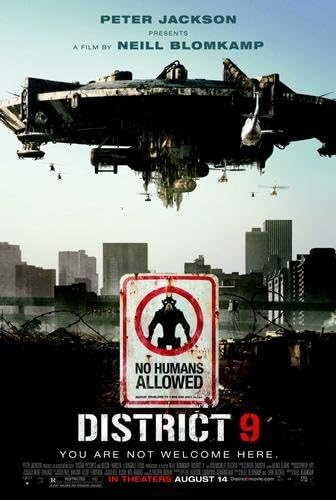 District 9 tries to do a few interesting things, and it largely succeeds. However, I think it also demonstrates the director’s, Neill Blomkamp’s, flaws that would come out more fully in his next two films, Elysium and Chappie.

In an alternate reality where a huge alien ship floats derelict over Johannesburg, South Africa, the country has been trying to deal with the over one million, essentially, refugees that have suddenly arrived. Initial hope led to conflict led to strife led to separation, keeping the aliens in a new district of the city that quickly turned into a slum with every problem therein. All of this is done while introducing our main character, Wikus Van De Merwe, a bureaucrat at MNU, the giant corporation in charge of security for District 9, and how he’s preparing an operation to deliver eviction notices to all 1.8 million alien residents before the company removes them to a far more remote camp, District 10. This opening 20 minutes is the movie and its stylistic choices at their best.

The movie has a documentary style that uses handheld cameras and interviews with experts and locals to make the events feel very grounded in reality despite the presence of aliens. It grounds it in a tangible reality that evokes events of South Africa’s past, mostly Apartheid, and the overall effect is quite strong. As Wikus moves into District 9, though, the documentary style begins to flag and break out of narrative necessity. We start getting images from no known in universe source. This didn’t really both me until my third or fourth viewing, but now that I see it I can’t unsee it. It’s not a big thing, as it tries to keep the visual aesthetic pretty consistent throughout, but it just kind of bugged me.

Anyway, Wikus goes from hovel to hovel, almost gleefully as he takes advantage of the dumber creatures, even going to the point of having a shack filled with alien eggs burned down, until he comes to the shock where Christopher Johnson is collecting a mysterious black fluid distilled from alien technology that he hides in a tube. Wikus finds the tube, gets sprayed in the face, and his life just begins to get worse. His arms becomes an alien arm, he gets kidnapped by MNU and forced to participate in experiments with alien weapons which can only be fired by the aliens themselves. He escapes, hides in District 9, and finds Christopher again. They decide to work together, Wikus getting Christopher into MNU to retrieve the tube and Christopher promises to reverse the changes to Wikus’ body. The movie then becomes an extended action scene for the rest of the film.

I remember this movie blowing me away when it first came out. Now, more than ten years after its release, I had a more muted reaction. I still enjoy it, think it’s good, and was happy that I revisited it. However, I felt like there was something a bit off about it that I hadn’t noticed before. The movie’s inability to keep with its documentary conceit was small and understandable (can’t have a dude with a camera following Wikus when he’s on the run), but it was when I realized the obviousness of some of his characters, especially the antagonists, and how they repeat in both Elysium and especially Chappie that I began to squirm a bit. The idea of a giant multinational corporation being bad guys doesn’t bother me, but every single aspect of them are just so uniformly awful that it ends up feeling like a cheap dodge, undermining the potential drama a bit. I also ended up finding the structure of the second half a little off as Wikus has to go back and forth from MNU to District 9 to MNU again and then back to District 9 which feels unnecessary to a certain extent.

But these are relatively minor complaints. Sharlto Copley is remarkable as Wikus, especially when you realize that he had no serious acting experience beforehand. The way he takes Wikus from blithely unaware at the beginning to a completely broken man by the end is fantastic. The special effects are rather remarkable as well when you consider the movie’s shockingly small $30 million budget. The aliens look great most of the time even in direct sunlight. It’s the sort of work I would expect from a much more expensive movie.

It’s easy to see why the studio would love Neill Blomkamp after this. Not only was it hugely financially successful considering its budget, but it was also nominated for Best Picture at the Oscars. No wonder they threw $115 million at him for Elysium, however I think the signs were there that Blomkamp needed more time being a hungry filmmaker, or at least the kind of guy who needed a serious writing partner, someone to give Blomkamp’s ideas the kind of depth everyone assumed was there. As it is, though, District 9 is a solid action movie with a different aesthetic and a great central performance.