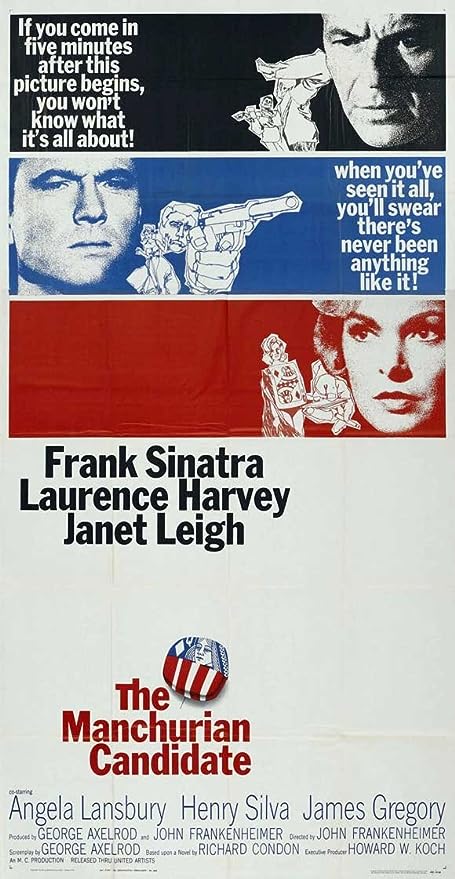 It’s still kind of shocking to me how well made this is almost sixty years after its release. John Frankenheimer really found ways to push his camera into odd angles film scenes in disconcerting ways to increase tension and anxiety all while translating a story that’s compelling and populating it with great characters. It’s rightfully held up as one of the great American political thrillers.

One of the things I find most interesting about how the story is built is how we know within fifteen minutes that the kidnapped Shaw and Marco were brainwashed by Chinese communists in North Korea, that Shaw is a weapon trained to kill no later than the thirty minute mark, and that Shaw’s American handler is his own mother by the hour point. The movie only holds back the specifics of the plan Shaw is in the middle of until the end, revealing it to us when it gets revealed to Raymond Shaw himself. It’s really the only bit of information that gets held back on the audience. Everything else up to that point has been on full view for the audience. That lack of deception on the part of the filmmakers demonstrates a shockingly strong trust in the audience to stay with the story even as the movie lays its cards out on the table (heh).

Anyway, the stepson of a US Senator, Joe McCarthy John Iselin, and his entire troop gets captured in North Korea and brainwashed. Raymond Shaw himself becomes the weapon, but the rest, most prominently Ben Marco, his commanding officer, get brainwashed to heap nothing but praise on their unlovable corporal while reciting, word for word, the events of a fictional event that lead to Shaw’s receiving of the Congressional Medal of Honor. Going back home, life tries to return to normal, but everyone realizes something is wrong.

The story is mostly told from the perspective of Marco, now a major in the intelligence wing of the Army, and how he follows his sleepless nights wracked with nightmares of a gardening party where Shaw strangled one of the two men lost in the enemy action to death. But the dream is fractured with images of Chinese and Russian officials. Another member of the same squad is having similar dreams, and the way all of this is filmed is just fantastic. Keeping all of players in the same place but changing both sets and even actors, there’s a shockingly clear line of sight into who is talking to whom and where everyone is, even as everything changes around them. It’s a really complex scene to put together, and it feels so completely effortless at the same time.

Marco can’t shake the feeling that what he says about Shaw, that he’s the kindest, bravest, warmest human being he’s ever known in his life, is all a lie and that the action he describes where Shaw was just so brave isn’t right somehow. Things go further after Shaw gets checked on by his Russian handlers before his handoff and he kills, under orders, the nice newspaper man who had given him a job after he resigned from the military. In an effort to get closer to Shaw, Marco shows up to New York to try and bond with the man he thinks is so warm but knows is impossible to like, and it’s here that we see the only place that Shaw was loveable, and that was with the daughter of the senator most opposed to Iselin, Senator Jordan.

It feels like everything Shaw does is an action to the desires of his mother. He wants to undermine her and her precious Johnny by refusing the goodwill tour from his return from North Korea and taking the job with the “communist” newspaper man, and by asking the daughter of Senator Jordan to marry him. It seems like just a happy coincidence that Shaw actually loves the girl, and with every action comes an equal and opposite reaction. Shaw’s mother does not take any of this well as the actions function as implements against her will to power, and she uses her status as Shaw’s American handler to fix her problems with Jordan, who will work to prevent Johnny’s ascension to the vice presidential nomination at the convention (meaning Jordan and Iselin are in the same party, which I never really realized before). Something must be done.

At the same time, Marco gets closer and closer to the truth as he watches Shaw get accidentally activated when he throws himself into the frozen lake in Central Park. It really should be noted that Frank Sinatra is really great as Marco. The way he conveys Marco’s tenuous hold on his own sanity with wild eyes and a broken voice as he pieces together his own nightmares with the reality of what conspiracy has entered the highest levels of government is great. And the scene where he tears out the wiring of Shaw’s programming is amazingly tense for what is essentially a back and forth conversation between two men in a room. Really, the final thirty minutes of the film is a remarkable building of tension that builds and builds until the resolution.

Lawrence Harvey plays Shaw really well, making him an unlikeable bastard and managing to turn it around when he’s in Senator Jordan’s daughter’s presence, but it’s Angela Lansbury who makes that relationship work best. Her conniving, amoral mother is the manifestation of the worst of Norman Bates’ mother from Psycho, pushing her son into murder to protect herself and her own power. James Gregory plays Iselin as a complete buffoon in the only performance in the movie I don’t like. He’s a caricature of Joe McCarthy and little else, and I find him grating. Janet Leigh as Eugenie, as has been noted many times before, never really feels like she fits into the movie based on how she’s introduced (randomly falling in love with Marco on a train to the point of ending an engagement for him), but she does provide a rock for him to work from in the second half of the film.

It’s not a perfect movie, but it is a great movie made great by fantastic performances, great editing, and an incredible final act that pulls everything together and makes the audience squirm. As a final tangential note, the final convention sequence reminded me a lot of Hitchcock’s two Albert Hall sequences in the two version of The Man Who Knew Too Much. They’re so similar with the main character scanning the upper areas of an indoor open area for a shooter, unable to move because of music, that it feels like homage. I don’t mind, it works on its own and this is the first time I’ve noticed the connection coming right off of the whole Hitchcock filmography.

Anyway, it’s really stood the test of time, feeling decidedly modern thanks to a fairly cynical air and inventive camerawork that feels at home in the 21st century as it did in the more experimental corners of 1960s cinema. It’s a great thriller.