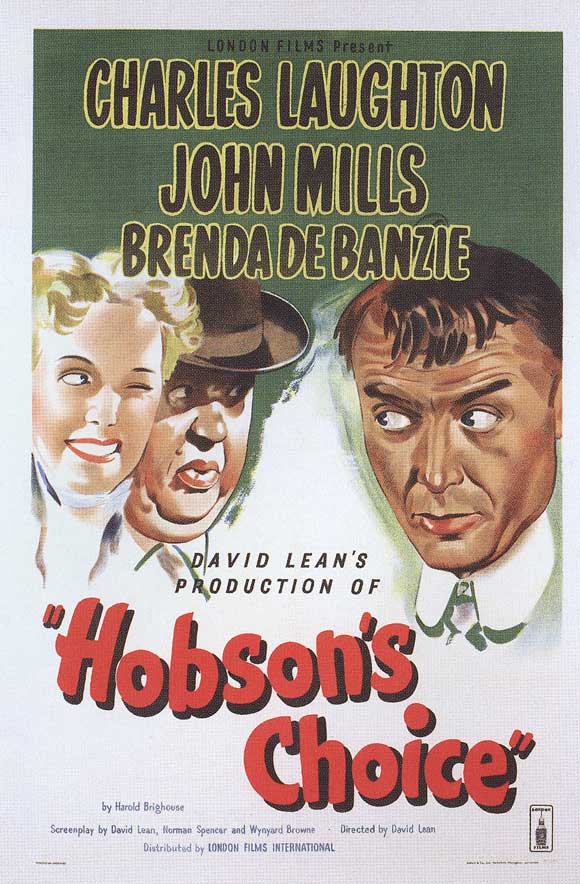 #4 in my ranking of David Lean’s films.

It wasn’t one of David Lean’s epic masterpieces that has convinced me he was one of the greatest directors to ever work in film. No, it was this little comedy based on a little known stage play from the second decade of the twentieth century that convinced me. It’s a minor film in a filmography that includes Lawrence of Arabia and The Bridge on the River Kwai, but it demonstrates a near effortless command of the craft, turning a stage play into a wonderfully cinematic treat anchored by a trio of wonderful performances. Lean was really good at this whole making movies thing, is what I’m saying.

An aging bootmaker who spends no time making boots or even running his own shop has decided that he needs to do something with his three daughters. They are driving him up the wall, acting as little more than impediments to the happiness he finds by long drinking bouts with his friends, other owners of small shops in their small town. So, he’s going to marry off the two youngest ones, the eldest being too useful for the running of the shop. The eldest, Maggie, does not take this well and takes matters into her own hands.

She, that very night, pulls their best bootmaker, Willie, from his place in their basement, begins courting him and settles that they should be wed. When the elder Hobson objects to the point of refusing his permission and even kicking Willie out, Maggie happily goes along with him. She, that very day, acquires a hundred pounds of capital from Willie’s most loyal customer, sets up shop, and opens the very next day. No time for permits or licenses in late 19th century England, mind you. They quickly overtake Hobson’s business, lowering it to the point of insolvency, all while Maggie forces Willie to become a better man, teaching him to read and teaching him business.

There are many joys in this film and chief among them are the performances of Charles Laughton as Hobson, Brenda de Banzie as Maggie, and John Mills as Willie. Lean knew how to wrangle Laughton into a focused performance of drunken misbehavior, and he’s wonderful. Brenda de Banzie is completely in control and assured as Maggie, convincingly demonstrating that she knows exactly what she’s doing the entire time. It’s John Mills’ Willie who changes the most, though. He starts the film as a meek little man who can’t believe he’s being called up from the basement to strolling through Hobson’s shop as the new owner with cheery confidence by the end. All three are wonderful, and they have a supporting cast of characters who are just as good in smaller roles including Prunella Scales, a future Mrs. John Cleese, as one of Maggie’s sisters.

However great the performances are, though, it’s really not those that convince me of Lean’s greatness. No, this is a stage play, and having gone through Hitchcock’s filmography recently, I know it when a stage play is filmed poorly (poor Juno and the Paycock, I’m never going to let that one go). I had no idea this was filmed on a stage play before I started it, only learning of its origins afterwards as I read up on it. Thinking over the action that largely focuses on three sets (Hobson’s shop, Willie’s shop, and the local inn), it makes sense that it could have started as life in a theater, but the movie never feels like it. The opening, after Hobson leaves his shop to go to the inn, is filled with visual tricks that help tell the story as he goes. In particular, I’m reminded of a shot of a local teetotaler looking out of a window disapprovingly at Hobson as he goes with the reflection of smokestacks pouring out black smoke in the glass. It’s a wordlessly cinematic moment that tells you the subjective feelings of Hobson towards the character in an instant. There are other moments as well, most particularly when Hobson hobbles home drunk and jumps through some puddles trying to stomp on the moon in the reflection, that feel so borne out of film rather than the theater, that the movie feels like it started as a film more than anything else.

Another joy of the film is the how the lighthearted nature of the piece carries a wonderful sense of comedy through it all. The clash between father and daughter isn’t played tragically. Instead, Maggie is so sure of herself and her abilities, that she treats Hobson more like a child than a parent, creating a dynamic that is almost infectious. As the relationship evolves and Willie becomes a more prominent player in it, the comedy evolves as well. Willie starts to become the man that Maggie is making him to be, and his unsureness at his new place is a great source of comedy as well.

Hobson’s Choice is a great little movie. Full of human touches and wonderful performances while feeling incredibly cinematic at the same time, it shows how a great filmmaker can really translate from one medium to another. David Lean was a treasure of a filmmaker.