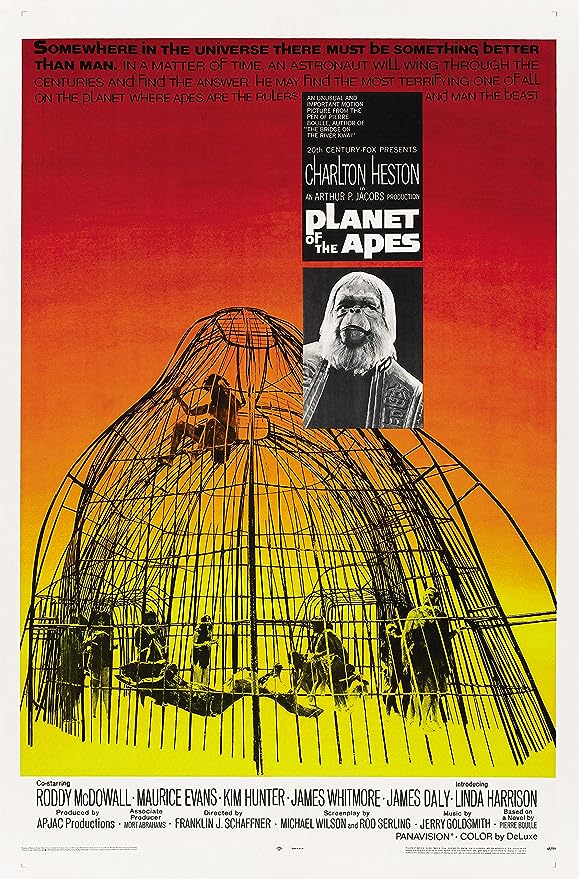 #2 in my Ranking of the Planet of the Apes Franchise.

In retrospect, the great twist at the end of the very first Planet of the Apes movie feels incredibly telegraphed. There are clues everywhere about the nature of the world that George Taylor, astronaut, finds himself on, but the biggest key is the thematic focus of the entire movie up until that moment. If the ending wasn’t what it was, then the journey that the man at the center of the tale finds himself on would have little to nothing to do with the man himself as he’s portrayed in the opening thirty minutes. Once you realize that the story has to have something to do with Taylor and his view of the humanity, it doesn’t feel like there could be any other ending possible. It just fits too well.

So, four astronauts have gone into deep space, and six months into their journey they’re going into cryosleep. Going at speeds approaching the speed of light, time outside of their spaceship moves faster, and the clocks onboard say that hundreds of years have passed. The ship crash lands as all four sleep into a lake that quickly takes the ship and one deceased crewmember with it under the water. The three survivors walk across the barren desert, having seen almost nothing of the ship’s readings of the planet, and struggle to survive. Up through the appearance of the apes, this opening is the movie at its best. It embraces the feeling of isolation, weirdness, and difference of life on another planet far from home really well, using large stretches of almost silent action that feel off-putting, especially with the atonal score by Jerry Goldsmith.

They find a group of mute humans, get rounded up by the dominant species of the planet, apes, and Taylor not only gets separated from his two companions, one of whom dies in the action, he also gets shot in the throat eliminating his ability to speak. Once the movie moves into the ape laboratory, it seems to lose something. Gone is the weird sense of foreboding, replaced by a more mundane look at another culture with heavy parallels to contemporary society, especially around certain questions of faith and evolution. Why go into the particulars of the ape society? Touching on the caste system, the religion, and how science is conducted all with the backdrop of ape treatment of humanity ever-present? Well, it ultimately all feeds into Taylor’s own views of humanity that he espoused both to himself and to his crewmates at the beginning of the film.

There’s no heavy-handedness of Taylor fighting for the rights of his fellow humans, he just fights for his own right to exist. On his side are Zira and Cornelius, two chimpanzees, one of whom studies humans and the other whom studies archaeology. Against him is Doctor Zaius, an orangutan and the Minister of Science. Taylor’s mere existence throws the existing order of ape society into disorder. Their sacred texts do not allow for the evolution of ape from man, and they often speak of man being brutish, untamable beasts. Taylor, who would have agreed with Zaius in the beginning if talking about humanity as a whole, must fight the idea that he is of that same race, prone to the same violence. He always wanted to be apart from humanity, giving him the reason for his deep space adventure in the beginning, but faced with the reality that he’s being judged for humanity’s failings and he’s going to pay for them, he has to fight back and stick up for the humanity he ran from.

That level of character work at the movie’s center never really occurred to me until this viewing. In fact, as I was watching this for the first time in probably ten years, I was actually put off by the extended hour between Taylor’s capture and his escape at the hands of Zira towards the Forbidden Zone. It felt, at first glance, like Taylor had wandered into some other movie, and the particulars of ape society didn’t seem to be all that important. However, I kept watching with this understanding that there must have been something, and it quickly dawned on me. It also made me wonder about the big reveal at the end.

So, Taylor has made his defense of humanity at an archaeological site that showed ancient humanity’s advances over ape, and he walks away still confident of his race’s superiority. Zaius immediately has the site destroyed, confident of his own beliefs in humanity’s faults and that Taylor would find the truth of humanity’s history out there beyond the Forbidden Zone. And, of course, he does. He finds the Status of Liberty, a hulk sticking out of the sand in one of the great movie endings of all time. Like all great twists, it was guessable and makes the audience rethink the movie that came before it. And boy, does the ending seem guessable. Ignoring the parts about apes speaking and writing English, the timelines of ape society match rather well with the two-thousand-year gap between the ship’s departure and crashing. Hearing that an ape society grew about twelve hundred years before the events of the movie seems like a small time for a society to grow to this point in normal terms, but if it were a branch of something that came before, it seems much more believable. And, of course, if it was just another planet with apes and humans without any connection to the humanity we know, then what’s the point of the emotional journey that Taylor goes on? It would feel like a waste.

This movie really has stood the test of time, and it’s not because it has some great quotes or a great twist ending. It’s well anchored by a great central character and journey, elevated by Charlton Heston giving a surprisingly committed performance while dressed in rags. It explores a central idea and treats its character’s path with surprising cynicism and cruelty, one of the traits of 60s and 70s science fiction that I find quite appealing. It’s a classic for a reason, and it’s not the reason most people point to.