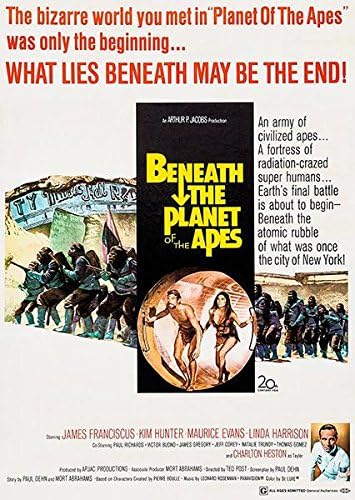 #6 in my Ranking of the Planet of the Apes Franchise.

In terms of follow ups to surprisingly great films that should never have had a sequel, Beneath the Planet of the Apes is almost the exact kind of movie that it should have been to come after Planet of the Apes. It expands the world of the film in a new and interesting direction, continues the feeling of weirdness that helped the original, and even moves the thematic ideas of the original into even darker directions. However, to even get to that the movie repeats the original, almost beat for beat, in its first half, introducing a new, not terribly necessary, protagonist, and spends so little time actually establishing the conflict that defines the second half that it all feels like wasted potential more than anything else.

The problems originated from the fact that Charlton Heston gave a flat refusal to starring in the sequel, eventually being talked into working on the film for two weeks total as long as his character of Taylor died. So, the writer and director decided that the best way forward was to give us a new astronaut, Brent, who had followed Taylor into deep space and ended up in the same place at the same time. That means that all of the revelations about the planet need to happen again to a character who’s a full movie behind the audience. He finds Nova, follows her to Ape City where he discovers the upside down nature of the place, meets Zira and Cornelius for reasons, and then escapes again. At the movie’s halfway point, he ends up in an abandoned New York City subway station and has his revelation in much smaller and less visually impressive environs than Taylor got at the end of the previous film.

Along with this action is some really ill-defined brewing conflict between the apes led by Dr. Zaius and General Ursus, a gorilla, and the Forbidden Zone. There’s a line of dialogue about how scouts had gone missing which seems to be the sole motivation for taking an entire army into the Forbidden Zone, and it’s thin stuff. The thing is that Dr. Zaius spoke in ways, at the end of the first movie, that seemed to indicate that the ruling class of the ape society knew a lot more about history and the Forbidden Zone than they told everyone else. It would have been easy enough to make the connection that Zaius knew of the mutant humans under the ruins of New York City, but not in any great detail, and assumed that Taylor was part of them, creating the argument that the mutants were expanding into ape territory, providing the impetus for the entire action. As it is, we spend so little time with them and so much time with Brent discovering what the audience already knows, that it all ends up as thin as possible.

The movie doesn’t even really feel like a sequel until the second half once Brent and Nova go deeper into New York City through the subway. It feels like that’s the actual beginning of the movie, and it should have been Taylor going in instead of this new character Brent. And the second half of the film has a bunch of stuff that I love. The mutants who worship an atomic bomb? Yes, please. I love that. They’re wearing masks that look like real skin to hide their mutated selves beneath? It doesn’t make a whole lot of sense, but I love it. The religious ritual that’s held in the remnants of St. Patrick’s Cathedral and uses Catholic prayers with bomb and fallout replacing any mention of God? I love it even more. It’s the exact kind of twisted stuff that 60s and 70s science fiction excelled at. Another thing that that era of science fiction loved was nihilism (which made Star Trek stand out because it was hopeful in a sea of nihilistic science fiction), and the movie ending with Taylor blowing up the world because screw it, it all sucks, is something I love.

Not everything in the second half is great, though. The use of Brent requires a late introduction to Taylor that feels out of place. There’s a fight scene that doesn’t really work for me. And, most important of all, the conflict between ape and mutant was so thinly established that when the gorilla army shows up and attacks, it feels really empty. There are some surprisingly great visuals here like when the gorilla army is marching into St. Patrick’s with the sole remaining mutant standing before the golden doomsday bomb, but they’re empty because, again, the conflict itself is empty.

And, to top it off, I think that the inclusion of Brent wasn’t just unnecessary from a storytelling perspective, but it was unnecessary from a production perspective as well. Some judicious use of body doubles and scheduling could have gotten Charlton Heston to carry his part of the movie completely in just a couple weeks of filming. The thing is that the ape society stuff needed to stand on its own without a human involved, having Taylor get lost in the mutant city early, spending time with Dr. Zaius to convincingly build the conflict with the mutants in the Forbidden Zone, and then leaning into the conflict as a continuation of the damnation of humanity that is the first film. I think it could have worked really quite well if there wasn’t a need to remake the film unnecessarily in the first half.

Oh well, it’s a mixed bad, but it definitely has stuff that works. Unfortunately, that stuff is outnumbered by the more mediocre material that supports it. It’s far from one of the worst sequels to a great film ever made. It has too many interesting ideas and visuals to dismiss it completely, but it could have been better.

4 thoughts on “Beneath the Planet of the Apes”