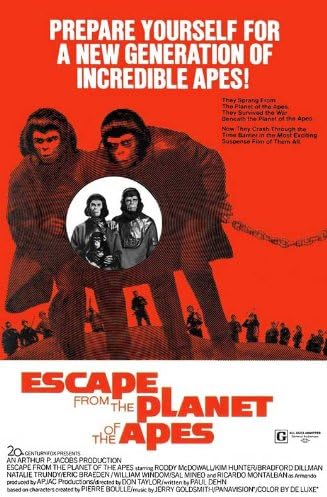 #9 in my Ranking of the Planet of the Apes Franchise.

This has a similar structural quirk to its predecessor, Beneath the Planet of the Apes, in that the movie doesn’t really seem to start until the halfway point. Everything up through the first forty-five minutes of both movies are almost entirely about justifying the movies’ mere existence in light of what came before. That was less of a problem in the previous film as it is in Escape from the Planet of the Apes where the two halves end up with vastly different tones and focuses that it hobbles the film in ways that prevent its other flaws from hiding.

The set up for this third entry in the franchise is kind of stupid. The primitively advanced apes of the first two movies have found Taylor’s ship, dragged it up from the bottom of the lake, fixed it, and launched it into space just in time to see the world crack from the doomsday bomb set off at the end of the previous movie. They then get launched backwards in time to a few months after Taylor and Brent launched into space and land just off the California coast. That’s a whole lot of ridiculous, and the movie inexplicably focuses on it for a very long time. Instead of just doing some handwaving and then finding some drama to sink their teeth into, the filmmakers give us extended scenes that try to delve into the particulars and specifics of the process. Once we get past that, we get extended scenes of our two apes, Zira and Cornelius, shopping in contemporary Los Angeles set to light music.

Now, here’s the thing, the Planet of the Apes franchise was, up to this point, really pessimistic about humanity. That’s been the core of the first two films, a pessimism about humanity’s ability to continue on from our current state. And then the third movie comes along and it muddles the waters greatly without adding much of anything. The humans treat the apes a whole lot nicer than the apes ever treated Taylor or Brent in the first two films. They’re downright nice, and this is what really defines the movie until the halfway point. If that were all the movie had to say, that the first two movies were wrong and we’re actually pretty nice and there’s hope for sure, then I’d be okay with that. I don’t mind subsequent movies in franchises saying different things than what the previous films said. The problem is that the second half then tries to reclaim the humanity is bad by fronting Dr. Otto Hasslein.

Hasslein is the antagonist, but he’s just one of many characters until the halfway point when he gets a pregnant Zira drunk in order to extract information from her. She reveals what they’ve been hiding that they knew they were from Earth’s future where apes dominated man and the world exploded. He then becomes obsessed with ending the intelligent ape line then and there, getting roadblocked here and there by people like the President of the United States. Hasslein’s late introduction and focus prevents him from ever building a character, but there’s a single line late in the chase to find the apes, who’ve escaped, that points to a far more interesting take on the material where Hasslein expresses impatience at the fact that there’s so much going wrong in the world and no one seems to want to fix it, so he’s going to fix this. It implies that the actions that will ultimately doom the human race aren’t borne of pure malice, but a sense of self-preservation. That’s kind of interesting. Unfortunately, Hasslein gets so little screen time in the first half of the film and the second half is so dominated by the plot mechanics of the chase to find Zira and Cornelius (and then their new baby Milo) that all we get is that one line. That’s an interesting idea, and the movie ignores it for pretty much the entire runtime.

Now, the thematic deficiencies of the film usually don’t get touched on in negative reviews of Escape from the Planet of the Apes, but I think they’re the bedrock of what’s wrong with the film. Everything else, from the clashing tones to the unconvincing comedy to the generally slapdash nature of the entire production, seems to come from the fact that the filmmakers never figured out what they were trying to do or say with the film. Because they never figured out what they wanted to say, they just ended up throwing different pieces together without ever trying to cohesively bring them together or even questioning whether they belonged side-by-side at all.

It’s really a bridge movie. Beneath the Planet of the Apes had left an ending specifically designed to end the franchise, but it simply made too much money to let the idea of another sequel die. So, they had to come up with something, and, Hollywood being trapped in ideas that aren’t really true, felt like they had to follow up the previous film with familiar faces, even if those were hidden by high quality chimpanzee rubber appliances. The bridge makes no sense and ends up working against what is surely supposed to be the final point. Instead of just leaping back in time narratively without desperately trying a direct link from the previous film to this one, they should have just set the movie in the version of Earth in the 1970s that led to the future dreamed up in the original film. Essentially, they should have just outright skipped making Escape from the Planet of the Apes and just gone right into making Conquest of the Planet of the Apes.

This is studio thinking and franchise filmmaking at its most incoherent.

1 thought on “Escape from the Planet of the Apes”