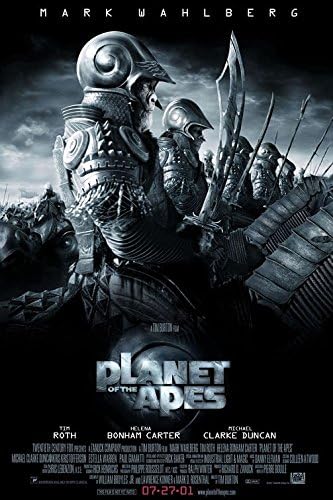 #7 in my Ranking of the Planet of the Apes Franchise.

It’s hard to talk about this movie without touching on its production history. This is a poster child for a studio using a recognizable name to hit a release date. They were going to release this in July of 2001 no matter what, and they rushed everything along. It’s possible to deliver a good movie with a constantly changing script like The Great Escape, but it’s more of a recipe for a mess. Tim Burton was not given any time to figure out his vision for the film, and he just filmed, at breakneck speed, a script that didn’t know what it was or what it was about.

Captain Leo Davidson is a pilot on a space station orbiting Saturn who’s in charge of ape pilots. When an unusual electro-magnetic storm sweeps by, they send in an ape who promptly gets lost, and then Davidson jumps into a pod without orders to try and find him. He gets hit by stuff and crash lands in a forest on a new planet. Before he can settle, he’s swept up in a chase of apes looking to round up humans. By the time Davidson is in a cage, being carted off to Ape City, a grand twenty minutes have passed in the film, and that’s the greatest source of the movie’s problems. It just simply moves too quickly, covering everything too shallowly, and more concerned with visual spectacle than actual storytelling.

On the space station, we get introduced to two humans beyond Davidson, and neither of them matter once he’s off the station. On the planet, we get views of about half a dozen humans who are going to tag along with Davidson through the end of the film and they never make any sort of impression. The apes do a better job, though. There’s Thade, an ape general and the chief protagonist, and Ari, the human rights loving daughter of a senator. The thing is that this movie feels like their story, but they don’t get introduced until the half hour point and they are very much not the focus. Davidson never gets any sort of emotional connection to anything on this planet, insisting on just getting off as soon as possible. So, our main character is a vessel obsessed with a single object and refuses any emotional attachments, while two of our supporting characters have the actual emotional support but are so far pushed into the background that every moment feels like it comes out of nowhere.

Davidson escapes, brings along his human companions and Ari, picks up the slave trader, Limbo, who had bought the humans from the military (whose only purpose seems to be picking up humans in forests), and they walk into the Forbidden Area. Meanwhile, Thade visits his father in the one scene that probably exemplifies everything wrong with this movie in microcosm.

So, Thade’s father is played by Charlton Heston, proving that he’s a great actor even under fantastic ape makeup. In this scene, we get introduced to a character who’s never been seen before and gets discarded by the end, an object of great value we’ve never seen before and gets destroyed by the end in what’s supposed to be a great dramatic moment, and callbacks to the original movie that end up falling flat. There’s no setup to anything that happens in this scene. It all just happens in quick succession, and none of it impacts with any emotion. It’s a dead scene that’s supposed to be full of meaning and winks to the audience that end up working against it. Much like the rest of the movie.

The thing about callbacks is that they are jokey by nature. It’s hard to make a callback of something extremely well known work dramatically because we all have the, “I know that reference,” reaction that undermines the dramatic import of the moment. So, when Attar looks down at Davidson and says, “Take your stinking hands off me, you damn dirty human,” the audience is chuckling instead of feeling any kind of fear. When Charlton Heston says, “Damn them…damn them all to hell!” we have the same kind of guffaw instead of any other emotion at the death of a character, who we haven’t seen before this very scene.

I’m not sure when it became de rigueur for pretty much every action/adventure movie of a certain budget to end with a battle scene against two armies, but Planet of the Apes is one of the most ridiculous of them. An army showing up out of nowhere in the minutes before the battle, flying apes with super jump abilities, and the death of side characters with dramatic feel that fall flat is how this whole thing works out. It’s bizarre and it betrays the fact that no one understood where the dramatic core of this movie was.

There are no ideas at play in this film. It’s just a bunch of people running around for two hours without ever giving the audience any time to think about any ideas or characters or even setting.

I’ve avoided talking about the original because this re-imagining of the idea works so poorly on its own that there’s really no need for comparison, but I do think that a comparison is justified in order to help explain why the 2001 version fails so badly. Just look at the first half hour of each of them. In the original, we get a very clear idea of who our main character, Taylor, is and what he believes. We get a steady build on the setting of this new world that comes to a shock at the sight of apes riding horses. In the re-imagining, we have a bevy of characters running around talking in inanities that don’t matter, special effects, and then an action scene without ever getting to know anything about our main character, Davidson, other than that he loves his ape and wants to get it back. It’s thin at its absolute best, and that’s not very good.

This was Tim Burton’s lowest point, but because of studio pressure on the production timeline, it could be excused to a certain extent. However, he went on to make Alice in Wonderland, so we all know that he had further depths to explore. This is a prime example of how not to reboot a moribund franchise. But, the ape makeup is absolutely fantastic, the movie looks pretty good most of the time, and this might be my favorite Danny Elfman score. So, it has that going for it.