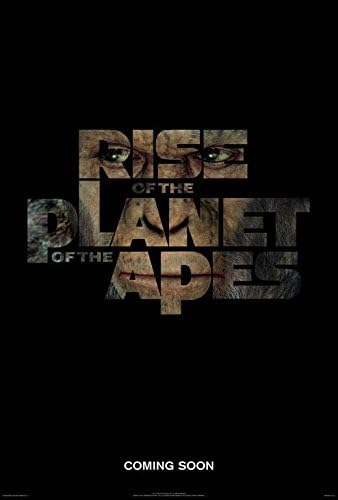 #5 in my Ranking of the Planet of the Apes Franchise.

This is a much smarter way to reboot a moribund series, taking the aesthetics into a new century while also updating the narrative to match with new technology. It also trusts the audience to empathize with a non-human character using that new technology, and then it includes the anchor of the human story which is simply not as strong.

Instead of trying to recreate any of the previous movies up to this point, Rupert Wyatt pushed the newest entry in the franchise in the Batman Begins direction of giving a grounded, modern take on a fantastical subject. Some chimpanzees are kidnapped from a jungle in Africa and sold to a company doing research into an Alzheimer’s cure. A female goes on a rampage after she’s infused, but it wasn’t due to the cure but because she was protecting her baby she had delivered in secret in the lab. The chief scientist, Will, takes the baby home, discovers it has increased mental powers, and keeps the baby he and his sick father name Caesar.

This opening is largely dominated by the human side of the story, and it suffers a bit for it. Will is played by James Franco who’s more of a performance artist than an actor and doesn’t really deliver much terribly convincingly. The antagonist is a money-grubbing corporate type with a British accent, Jacobs, and he’s flat and uninteresting. The scientific stuff is not terribly convincing, feeling like Hollywood dealing in stuff it doesn’t really understand. What saves this part is really John Lithgow as Will’s father, Charles. He’s a quality actor playing the disheveled and confused old man really well and with a depth of humanity that is missing from the rest of the performers.

However, it’s at about this point that Caesar begins to take center stage. Caesar the character and performance by Andy Serkis is the single greatest part of this movie, and he’s great, one of the single greatest things about the franchise up to this point. Caesar grows from an innocent baby monkey into a cynical and hardened leader who uses what tools he has to stand apart from humanity and push ape-kind into a new direction. The digital performance, captured from Serkis’ own motion captured performance, is subtle and touching.

Caesar ends up defending Charles from their butthead neighbor (another flaw in the movie since he’s so thinly drawn and cartoonish, but the part is small, so there wasn’t a whole lot else to do) and gets ordered by the court to remain in an ape sanctuary just outside the city of San Francisco. It’s there that Caesar first encounters other apes, sees their limitations in contrast to his own heightened intelligence, and how, despite how nice Will and his girlfriend Caroline were to him, Caesar is still a step lower than humans in this world. It’s a situation he can’t stomach after a while exposed to the unvarnished truth. This is where he hardens, searching for a new truth, and it’s all done wordlessly, anchored entirely by facial performances. It’s great.

Caesar’s solution is to expose the rest of the apes along with him in captivity to the compound that Will had been working on, breaking out and stealing it from Will’s own refrigerator since he had been doing so much work on it, giving it to his father, outside of work (thin, but okay). With his newfound alpha status and a few dozen suddenly intelligent apes (the scene where they wake up and understand what’s going on around them significantly more is a great quiet moment), Caesar decides that they won’t live in captivity. Instead, they will escape to the Redwood forests on the other side of the San Francisco Bay.

It’s pretty much at this point that the human side of the story finally and completely becomes mere support to the main story of Caesar’s journey, and the movie improves greatly. Caesar works to get his people free, the movie embraces some action conventions with the apes freeing the apes at a zoo and the remaining apes at the genetics lab before grabbing spears and fighting off the police and Jacobs over the Golden Gate Bridge. It’s a satisfying use of action elements because of the clear emotional anchor that is Caesar.

Now, a moment about callbacks. In my review of Tim Burton’s re-imagining of Planet of the Apes, I complained about the callbacks, saying that they were poorly placed and ill-used, arguing that they could never rise out of guffaw territory. Well, Rise of the Planet of the Apes has several callbacks, perhaps more than Burton’s movie, but they work significantly better. Let’s take one for example. Tom Felton’s character, Dodge, is facing down Caesar at the beginning of his revolt, and Caesar grabs Dodge. “Get your stinking paws off me, you damn dirty ape,” Dodge cries out, giving the audience that moment of recognition to something it knows, but then the movie immediately undercuts that with a big emotional moment, Caesar saying his first word, “No.” The sudden “No!” undercuts the guffaw moment and brings the audience immediately back to the emotional reality of what’s going on, focusing us on what Caesar is doing. So, the movie gets its callback to a famous line from the original film, fits it into the situation rather organically, but then moves on very quickly to keep the focus where it needs to be, Caesar. It’s a very good way to make callbacks work in dramatic situations, essentially making sure that they aren’t the focus.

Anyway, if the focus were more on Caesar, the film would be great, but because we spend so much time with the uninteresting and rather bland humans through the first half, it’s not as good as it could be. It’s not that the human stuff is bad, it’s just that it’s not terribly interesting especially in comparison to what Caesar goes through. Still, it’s a solid way to reboot a moribund franchise in a new time.

1 thought on “Rise of the Planet of the Apes”