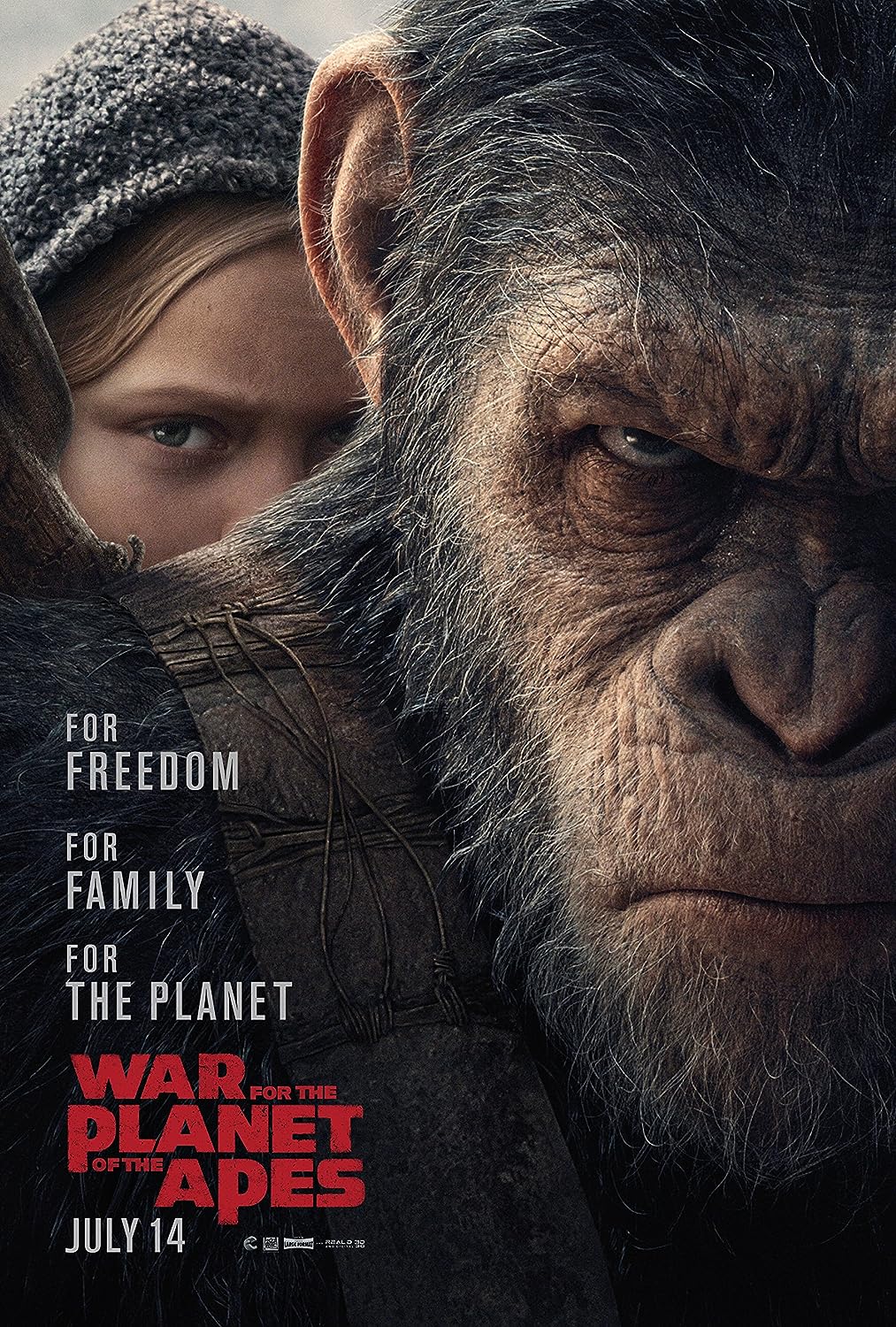 #3 in my Ranking of the Planet of the Apes Franchise.

The renewed Apes franchise comes to a conclusive end (while keeping things open for further sequels that are currently in development) with a trilogy capper that intelligently explores the fallout from the previous film for the main character. Matt Reeves follows up one of the best big budget special effects driven films of the last decade with a very good film that understands where the central character needs to go next.

It’s been several years since the events of Dawn of the Planet of the Apes and Caesar has been running a guerilla war against the remnants of the US military at his heels. The movie begins with a pitched battle as the military finds the ape refuge and attacks only to get defeated soundly. Caesar has hardened since the war started, but he’s still grasping onto his morality, manifested by him letting the few survivors go back to their colonel with a message that the war could end if the humans would simply leave them alone. That, of course, does not come to pass. Instead, the colonel brings in a special ops force to sneak in at night and assassinate Caesar in his sleep, killing Caesar’s wife and eldest son instead. This does to Caesar what Koba had wanted from him before his death. Koba saw nothing good in humanity, and now, having felt the terrors of war firsthand and personally, Caesar falls into what Koba had wanted before his death.

The new film intelligently keeps Koba around, not as a primary antagonist, but as a ghost who haunts Caesar. The defeat of Koba himself doesn’t defeat Koba’s ideology. That’s something that Caesar must continue to fight long after Koba himself has died. At the death of two members of his family, Caesar falls instantly into that, abandoning the ideological fight that he had won, and seeing nothing but the innate evil of humanity. He sets out on his own (with a few others who refuse to be left behind) to kill the colonel himself while the rest of the herd moves off to find somewhere else to live, their location having been revealed to the humans.

Along the way, they pick up a mute girl, and while the girl herself ends up working really well, I feel like her early introduction, right after Caesar has determined that he has become a Koba-like nihilist, is a bit too obvious. Suddenly, Caesar has a little human girl who could never be a real threat to him in his presence right after he picked up his anti-human feelings. Well, yeah, she’s going to be one of the primary vessels to get him out of it, why do you ask? They also end up meeting a new ape, one who has no connection to the group but still can speak and has the increased intelligence of the rest, Bad Ape, a former denizen of a zoo who’s been barely surviving just outside of humanity’s reach and knows of the likely place where the colonel went to.

What’s interesting about the human characters in this, the third of the rebooted Apes franchise, is that the humans are possibly even more interesting than the apes for the first time. The Colonel is a version of Colonel Kurtz in the movie’s most obvious reference to Apocalypse Now. He’s a madman who’s seen things that his superiors haven’t. They don’t understand, and, what makes him most interesting, is that he’s actually right to a great degree. His effort to destroy the apes isn’t driven by hatred, but by a change in the nature of the conflict that Caesar doesn’t even realize has happened. The virus that wiped out most of humanity and made the apes smart has mutated and started making humans no more than beasts. It’s not a clash of civilizations, it’s a fight for humanity’s survival, and no one has realized it yet other than him. To add to the character, Woody Harrelson is absolutely electric as The Colonel. He’s quiet, intelligent, zealous in his belief, and cruel all at once. His scenes with Caesar are the absolute height of the film as Caesar steadily gets to know the man he wants to kill.

Caesar’s hatred, though, gets balanced with the fact that The Colonel found the herd and captured them, forcing them to build a wall at the abandoned weapons depot. He can’t simply act on his own emotions despite moving in ways designed to separate himself from responsibility. Instead he finds himself grounded by his own people, no matter what he tries. He can’t completely descend into Koba’s viewpoint. He still has a small son to worry about.

It comes down to the conflict between The Colonel, who’s taking a by any means necessary approach to a fight he knows he losing, and Caesar, who was willing to take a similar approach in a fight he had thought he had already lost, that is the center of the film. Perhaps the best scene is when the conflict comes to an end, and Caesar cannot take his vengeance anymore. It’s a mixture of pity, anger, and relief that goes across Caesar’s perfectly rendered digital face, and it shows him a different way forward, one that helps him purge himself of Koba’s ghost completely.

War for the Planet of the Apes is steeped in the history of the franchise, using elements such as Nova, Charlton Heston’s voice, the Alpha and Omega symbols from Beneath the Planet of the Apes, and the human muteness as building blocks in a story about Caesar’s final journey into leadership and personhood. It also intelligently uses movies of the past, particularly Apocalypse Now, as inspiration for how to tell this story, going beyond parody and firmly entering homage while standing on its own two feet. I suppose my only small problem is the early use of Nova, though I do appreciate how she gets used later. Still, the movie is a very good final chapter to this new Apes trilogy.

1 thought on “War for the Planet of the Apes”