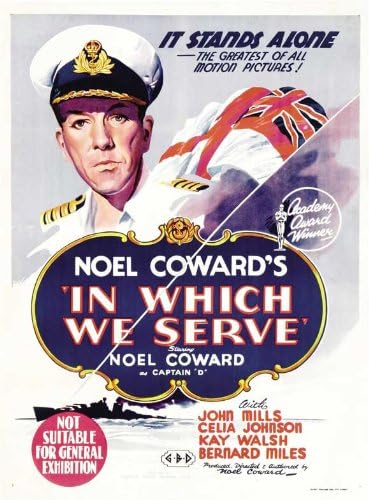 #11 in my ranking of David Lean’s films.

David Lean’s first feature film as a director after a decade as an film editor came about because Noel Coward wanted to direct his own film but wasn’t sure enough of his own abilities directing a film. So, Lean was brought in with his reputation as the best editor in England, and Lean, apparently, largely took over directing after a few weeks of solid work. It’s very much a wartime film done to help the war effort’s emotional toll on the audience that included sailors and their families back home, but both Coward’s script and Lean’s direction create an array of believable characters performed admirably by the cast (including Coward) that anchors the film in an emotional reality for these people beyond just being a propaganda film. It turns out to be a film that still connects eighty years later.

The story of a ship from its construction in the opening to its sinking…minutes later, is told mostly through flashback as a group of survivors cling to a rubber raft after the destroyer the HMS Torrin was hit by a bomb. The main three that we focus on are Captain D. (Coward), Blake (John Mills), and Hardy (Bernard Miles). The transitions backwards in time are artificial but still rather elegant, focusing the camera on a particular character and then dreamily dissolving backwards in time to an event before. They’re not driven by particular reminiscences from the character or conversations, just a more literal bridge from what we’re seeing now to what we’re transitioning to next. The mechanical aspect is strong, but the emotional aspect is weak, but it’s still a strong move overall, possibly influenced by Lean’s editing career.

Getting to know the three men as they cling to the raft with some others as they watch the remnants of the Torrin sink beneath the water, we see how Captain D. said goodbye to his wife and two children before whipping the new ship into shape with a firm but kind hand before its maiden voyage. We watch as Blake meets a girl on a train and their whirlwind little romance that leads to a quick marriage before he departs. We also see Hardy, who is actually Blake’s new uncle-in-law after the marriage, and his tender relationship with his wife. It’s a strong basis to build the rest of the story, fleshing out these characters so that they are more than just archetypes or thin excuses for military type shouting.

The action then moves to the Torrin’s actions between its launch and the attack that sunk her, taking her from the start of the war with a strong scene as we watch out characters in different locations listen to Winston Churchill’s speech declaring war on Germany. They go out to sea, finding a burning ship in the night and getting torpedoed in the ensuing action, barely limping home afterwards in a rather intelligent subversion of expectations as we imagine the battle to be where she sinks and then the tense ride back to be where she gets attacked by the bombers only to find out that it’s still in the future.

We do eventually get to the action that led to the Torrin’s sinking, and we finally move on from it as the remaining crew is rescued. The finale where Captain D. has to give a speech in commendation for his crews bravery as they split up to be placed on different ships is a strong final moment only matched by the long takes of him shaking his men’s hands including both Blake and Hardy.

It’s handsomely made and very much of its time being made mid-war and about the war effort itself. However, Coward’s pen and Lean’s directing makes it about the men themselves which turns the timely tale into a timeless one of men in war and the women they leave behind. It’s a strong opening work and a good example of how working one’s way up to the directing chair by learning other elements of the craft first can yield strong narrative and cinematic dividends. Lean did not direct this on his own, but he did start his directing career with a winner.

1 thought on “In Which We Serve”