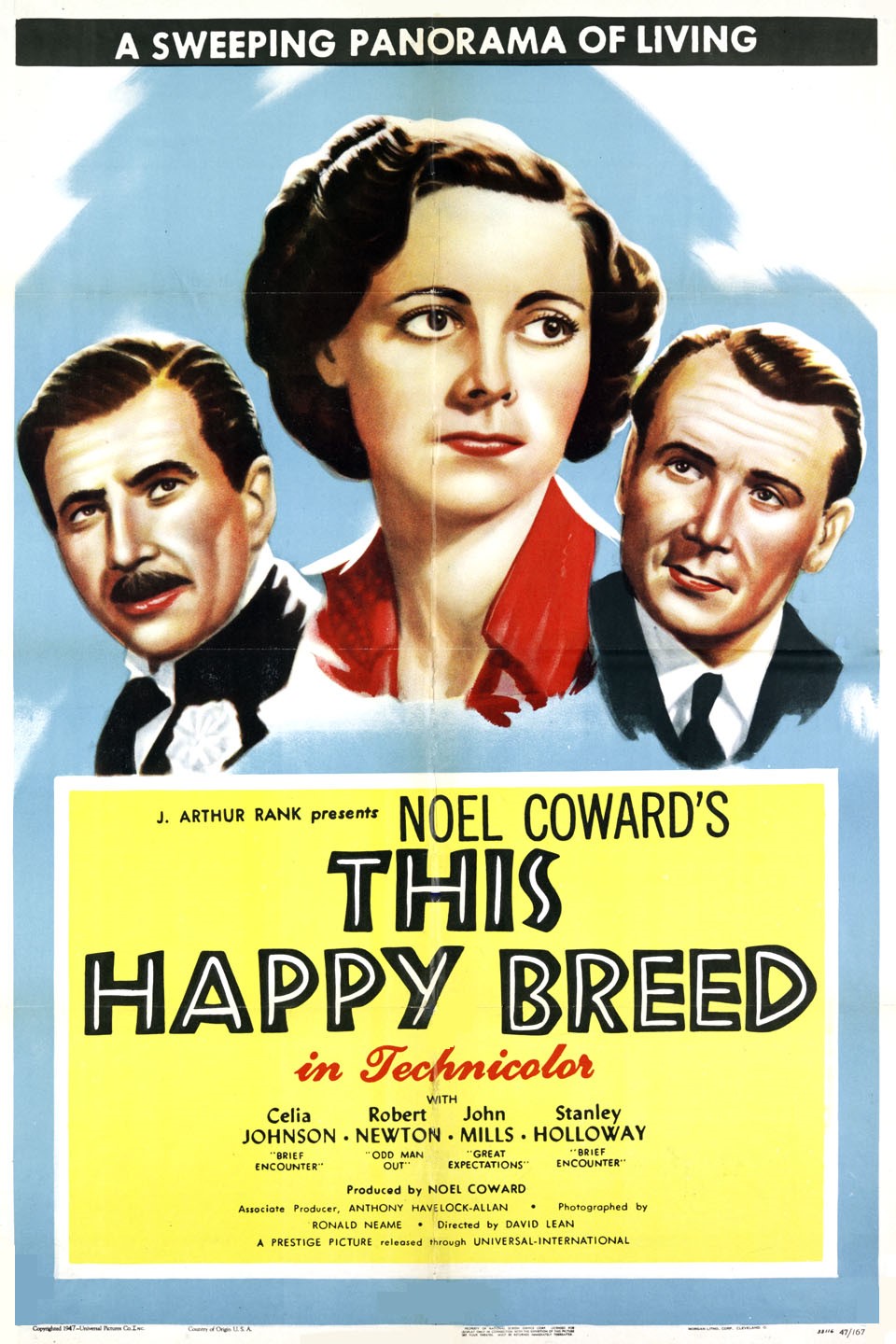 #8 in my ranking of David Lean’s films.

David Lean continues his burgeoning directing career by working again closely with Noel Coward, this time adapting one of his plays for the screen. Telling the story of a middle class British family from the end of one World War to the start of the next, This Happy Breed leans heavily on the themes that would resurface in Lean’s later films about the conflicting and, at times, complimenting ideas of change and permanence. It also returns many of the actors that Lean worked with so well in In Which We Serve including John Mills and Celia Johnson.

After the close of The Great War, the Gibbons family moves into a house in the suburbs of London. Middle-aged Frank fought in the war while his wife, Ethel, and three children, Reg, Vi, and Queenie stayed behind. Their new neighbor is an old acquaintance of Frank’s from the war and things seem to already be settling down into familiar old rhythms from before the four year conflict. Frank and Bob, his friend and neighbor, drink regularly with toasts to their different regiments, both of which, they decide, were the best in the world. Ethel runs the house with her mother and Frank’s sister. It’s the children who represent the changing world around them.

Frank and Ethel aren’t interested in the burgeoning flapper culture, but Queenie is. Frank and Ethel aren’t interested in the new political movements, most notably socialism, but Reg is. Vi is closest to her parents, but even she marries the young socialist friend of Reg, helping him to settle down at the same time. Over the years, the family steadily breaks apart for different reasons. Queenie runs off with a married man to France instead of marrying Bob’s son Billy, a sailor in His Majesty’s Navy. Reg and his wife get killed in a car crash. Everything seems to be disintegrating along with the newfound peace of Europe as Hitler rises to power and fascism comes to England on the street corners of London.

And yet, just on the eve of war with Neville Chamberlain returning to England with his successful plan for peace with Hitler, which was of course doomed to failure, the family begins to reassemble as best as it can when Queenie returns home, married to Billy, long after having been abandoned by her lover in France. There’s a comfort to be found in the changes that have occurred through the two decades since the end of the last war and in the things that have remained the same at the same time. As Frank and Ethel clean out their house to move into the country, the mirror image of how the movie began with them moving in, they pause to reflect on their time there. England will always be England, they seem to conclude as their family functions as a metaphor for the country and the times they’ve lived through.

Made in the middle of the Second World War, there’s a sense of propaganda about the film in telling the audience, who would be predominantly British, that despite all the changes that have come to their nation over the previous two decades they were still of the same breed that won the last Great War. There’s not a single shot of a battlefield beyond a poster for the travel agency that Frank works for, but it does fall under the same umbrella as William Wyler’s Mrs. Miniver. At the same time, though, the character work is strong enough to raise the movie from its status as propaganda and work as a straight drama, much in the same way that In Which We Serve was able to focus strongly enough on the sailors to make it a strong piece at the same time.

Acting is solid all around especially from Celia Johnson as Ethel who goes through the most having to reject her own daughter, Queenie, after she leaves for France. A filmed play, it never feels like it’s limited to a single set, though most of it does take place in the house with only brief sojourns outside. Lean found ways to keep the framing interesting and changing throughout in non-flashy ways, keeping the movie visually engaging throughout.

It’s a solid little drama that, much like Lean’s previous film, is very much of its time but strong enough to stand outside of it as well. This Lean fellow might have a future in directing.

2 thoughts on “This Happy Breed”