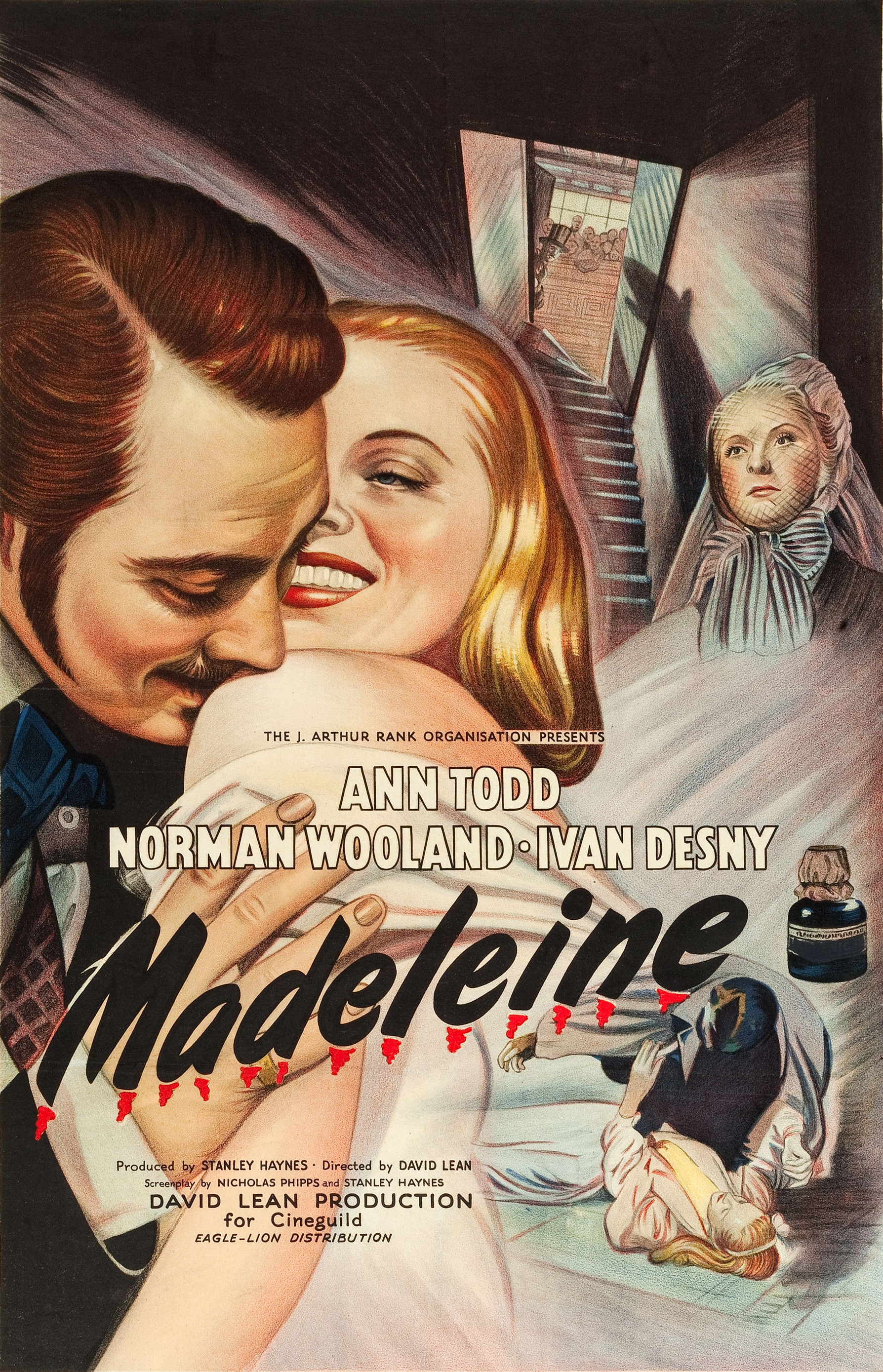 #16 in my ranking of David Lean’s films.

David Lean considered this his worst film, and I would agree with him (until I see Ryan’s Daughter for myself, that is). Recently married to Ann Todd who starred in the stage production of the play the movie is based on, Lean took this up as his next project after The Passionate Friends as a kind of wedding present. He made a movie of her favorite stage role, but the movie isn’t all that well built. Probably remnants of the stage play that hinder it more than anything else along with a desire to get through the effort as quickly as possible because his heart wasn’t in it, Madeleine is a curious little bore of a movie that really ends up tanking in the final act.

A well-to-do family in Glasgow in 1857 move to a new house in the city. Madeleine, her widowed father, her little sister, and their servants move in, and Madeleine continues a love affair with a Frenchman she had been playing out before the move. Their affair is a secret from her father, and the movie trips out of the gate with their relationship. Madeleine and Emile have no chemistry and they barely seem to actually like each other. She seems to like the idea of him more than him. They sneak off into the night and go into the country where they stand a few hundred feet from a dance populated by the lower classes. She wants to dance to the music in the forest, and he awkwardly stands there acting like he has no desire to spend any time with her. This inability to establish a passionate relationship with Emile hobbles the movie from the get go.

Not knowing of Madeleine’s betrothal to this unknown Frenchman (and never going to approve it because of his lower station and lack of prospects anyway), her father sets a match with    William Minnoch, a respectable young man. She’s resistant because of her attachment to Emile, but she eventually gives in and tries to cast off the Frenchman in favor of the new beau. Emile does not take this well, showing up in the middle of the night to beg for Madeleine’s hand again. The situation devolves to the point that Emile begins to threaten to show the letters Madeleine wrote to him to her father, and Madeleine panics, trying to poison Emile with a cup of cocoa. It doesn’t work because the dosage is too small, he recovers, and she begs him to come to the house again. The movie then does something I find irritating.

Point of view is a very important part of storytelling, and when we’re being told a story from a particular point of view but skips over a key event simply to keep the audience in the dark, it’s dishonest on the part of the storyteller. Well, that’s exactly what happens. We’ve seen this entire story up to this point from Madeleine and Emile’s point of view, and the key event, Emile’s second trip after their split to Madeleine’s house, is completely skipped over so we don’t know what happens.

Emile dies of arsenic poisoning, Madeleine gets arrested for the crime because she tried to purchase arsenic and the police found her letters in Emile’s possession, and the movie becomes a courtroom drama for the last half hour. This is where I was reminded of The Paradine Case, another unsuccessful courtroom drama from a highly accomplished director, mostly for aesthetic reasons, although the defense’s efforts to pin the crime on someone else instead of just trying to establish reasonable doubt on the purported actions of his client does arise to a lesser degree (though it actually works this time). The problem really is that Madeleine, our main character, pretty much disappears for the whole thing. She’s there, but she sits placidly as two men, the defense and the prosecutor, talk for thirty minutes. It’s uncompelling stuff, though there is some style to the effort as we go from the lawyers’ words back to given evidence in flashback that helps tell the story a bit more cinematically. And yet, it’s still largely uncompelling, though the questions that get raised about the guilt or innocence are interesting, though it’s all a lie because the movie shouldn’t have skipped over the scene that we had every right to see.

The movie has a broken opening, a pretty good middle as Madeleine navigates the dangerous waters she set up for herself, and then a rather dull ending. There’s something of a twist in the final shot, but considering the frustrating way that the movie gets to that I find it irritating more than intriguing. It’s not worthless by any means. Ann Todd gives a fine performance. It’s handsomely filmed with some striking images here and there, but it’s also deeply flawed.