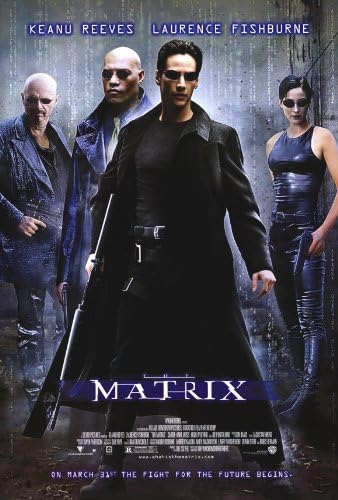 #1 in my ranking of The Matrix franchise.

I’m gonna be honest. The Matrix is overrated. It’s good, a solid adventure story with great action, but it’s pretty far from one of the greatest movies ever made. It has a bunch of pluses, and I understand why people fall all over themselves because of those pluses. However, at the same time, the third act doesn’t really follow from the first two and I find pretty much every dive into philosophy the movie takes both unconvincing and unengaging, breaking from the film.

Now, the first thirty minutes of this film are, well, they’re fantastic. The steady build to the reveal of the world is so expertly doled out and handled. We get two real reveals, the first in the very first scene and the second thirty minutes in. The first is that we’re in a world where certain people can bend the rules of physics manifested in impossible jumps. It’s intriguing and an introduction to Trinity the character as well the rules of the world around her. We then get Neo, asleep at his computer, with a few lines of text mysteriously coming onto his screen, waking him up, and bidding him to follow the white rabbit. One meeting leads to another which ends up getting Neo in a room with three agents who place a weird, leggy, machine bug into his navel. This is weird stuff, and it’s all just clues about what’s coming. We, as the audience, still only know as much as Neo even though we’ve seen Trinity’s ability to jump. Meeting Morpheus, Neo gets his red pill, his choice, and he ends up finally waking up to one of the great reveals in popular film. The change in aesthetics from the grounded reality in the Matrix to the hyper-stylized future tech and body horror that is Neo waking up in the gooey pod on the side of a giant building with flying machines and tubes connecting all over his body is amazingly effective.

And then the movie loses a step. Neo has to recover and the movie takes some time to slowly get us and Neo up to date with the new reality. We get re-introductions to the crew of the Nebuchadnezzar, the ship itself, and the technical side of hacking into the Matrix as well as the instant learning mechanic that allows Neo to become adept at Kung Fu without years of training. Now, we probably did need a bit of a break from the ramping up of the first half hour, but there’s something about this section that feels circular, like it’s mostly treading water. There’s some cool stuff in here like the fight between Neo and Morpheus to test Neo’s newfound abilities, but there’s also a lot of talking and explaining. The Wachowskis did their best to vary it up visually, but it’s still a lot of exposition in a short amount of time. And some of it ends up feeling really wrong when you think about it like when Morpheus justifies killing anyone in the Matrix to further their ends (when you realize that the entire film is a manifestation of the Wachowskis’ political philosophy it feels even worse).

Now, the third act. The third act has some absolutely fantastic action, and I love the textual feel of fights. The dust that collects on everyone, the cramped quarters, and the rather brutal feel of it all is just great spectacle, but the fights revolve around actions that don’t really seem to follow that well from what came before. We get so much talk about the bigger conflict, and it would feel like the third act should be that bigger conflict between humanity and the machines coming into play somehow. Instead, the conflict actually contracts with Morpheus getting kidnapped and Neo and Trinity needing to rescue him after one of the crew betrays everyone to get back into the Matrix (with some darn good reasons, I’d say). There’s more action, but the stakes actually seem to contract with fewer players and an almost myopic focus on the saving of one man in the face of the larger conflict.

Now, there’s a problem through all the Matrix movies where the subtext is way too prevalent in the text and that it also ends up interfering with the actual story. The subtext of all three is choice within a system of control and free will, so that’s where the source of the third act conflict comes from. It’s not a story decision but an effort to force a story to fit the subtext, and I feel like that’s handled rather inelegantly. The Wachowskis were treating the first film like they wouldn’t have any other (a good idea in general), but their focus wasn’t on making the story flow from beginning to end it was on getting their philosophical ideas in. It feels like they sacrificed a more natural third act to fit the story that came before so that they could make sure that this movie said what they wanted about choice. And I don’t think they end up saying anything particularly interesting about choice through it all.

Anyway, that’s enough carping on my account. For all of my problems with the film’s ability to manage subtext and text, it really is consistently entertaining. The action is just simply great, tactile, and almost painful to watch (my favorite probably being the Morpheus and Agent Smith fight in the bathroom). Actors are fine with Keanu Reeves firmly within his limited range, Carrie Ann Moss blankly falling in love (in a love story I never found convincing), and Lawrence Fishburne saying everything with great importance. Hugo Weaving is the only one as Agent Smith who seems to be having any fun with his part.

It’s a solidly good action film with one of the great first acts in popular film over the last few decades, a surprisingly slowly ponderous second act, and then an entertaining third act that feels like it could have been more. I kind of get the love, but I definitely don’t share it.

4 thoughts on “The Matrix”