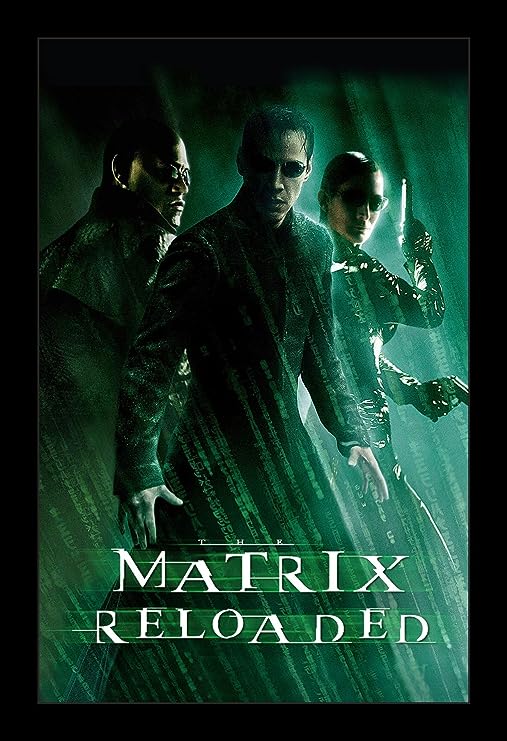 #3 in my ranking of The Matrix franchise.

So, I’ll say it first: The Matrix sequels are failures of imagination. I think this hobbles the first sequel more than the second since the first takes place mostly in the Matrix and the second takes place mostly outside of it, but there’s still a surprising mundane feeling to the basic plot mechanics that feel like a let down after the promise at the end of the first movie. That being said, you review the movies you get not the movies you wish you got, so, taking the failure of imagination in stride, here we go.

It’s been some time since Neo woke up and changed the rules of the Matrix. They’re freeing more minds than ever and feel like they have the machines on the run. You know, for a sequel to a movie that started so incredibly well, the opening hour of The Matrix Reloaded borders on boring. The slow and steady reveal of reality in the first is replaced by just so much talking about how things have changed. We don’t really see any of how things have changed, and we dive headfirst into the entire trilogy’s problems which are its insistence that its philosophical musings are more important than the story. Instead of trusting the audience to find the ideas of choice and free will in the actions of the characters, the Wachowskis have the characters talk, and talk, and talk about choice and free will, about belief, and about the situation at hand. Surprisingly little is shown. Even the important information that the machines have started drilling towards Zion, the last human city, is conveyed through dialogue, a choice hobbled by the fact that so much effort went into The Animatrix and the short “Final Flight of the Osiris” which ends up acting as a prologue that’s not actually part of the film. This push for a multimedia story was a mistake, and they should have really focused on telling the story as well as possible in the actual movies.

After endless talk, an extended rave scene meant as defiance against the machines, and a couple of well executed but pointless action sequences, Neo revisits the Oracle and the movie actually feels like it begins…an hour in.

But, of course, we also need another long talk about choice and free will, and then she gives him the first in a series of clues that he needs to follow to reach the Source. There’s a very video game-esque feel to this where they have to go one place, talk to someone, have a fight, go another place, have another fight, and then get to the place. However, I’ve always thought that the entire Matrix saga is best when it fully embraces spectacle, and that’s ultimately what The Matrix Reloaded does in its last hour. The fight in the palace, the chase through the freeway, and every variation along the way is incredibly well executed. There’s a cleaner, glossier aesthetic to the visuals than in the original which robs the action of some of its visceral power, but it’s still a great spectacle. The final confrontation with the replicating Agent Smith is tightly filmed in a white corridor, and it works.

Now, for all my complaining about talking in these movies, I have to say that the one scene of talking I love is with The Architect. It seems like an odd choice since it’s some of the most esoteric stuff told in a cadence and with a vocabulary that seems incredibly unnatural, but so much is revealed that recasts most of what came before. The idea that this is the sixth Matrix is one in particular that I love. The Architect’s cold assurance of Zion’s destruction is also great. It also completely undercuts the entire idea of prophesies (as another element of control), and anything that says that prophecies are junk gets a thumbs up from me (unlike some other movie I could mention). And then the movie fumbles again.

The central love story between Neo and Trinity never worked. It didn’t work in the first film, it doesn’t work here, and it doesn’t work in the third. There’s not an iota of chemistry between Keanu Reeves and Carrie Ann Moss, and it really does help that the Wachowskis directed their actors in the sequels the same way that Robert Bresson directed actors to drain performances from them. The influence is supposed to be Stanley Kubrick doing eighty to ninety takes on everything, but the effect is unintentionally what Bresson did on purpose. Every actor except Harold Perrineau as Link feels dead and lifeless. It’s not the sort of thing you do to sell a love story. Kubrick knew exactly what kind of performance he wanted from people, so he did takes until he got it. Bresson wanted a world-weariness for his films. The Wachowskis wanted to do something that Kubrick did because he did it, and the end result is an impassioned score over two actors staring at each other blankly. Neo flying to save Trinity, potentially sacrificing all of Zion in the process, even as The Architect talks about how obviously in love Neo is with her, falls flat.

Still, as I said, these movies work best as action spectacles, and that this movie has in spades. Every action scene is incredibly well filmed and performed. The only real issue with the visuals in these is the primitive cloth simulations that make the CGI elements plastic. Everything else is vibrant and exciting on a facile surface level, and that’s all I have ever really seen even the original as: vehicles for action scenes. The philosophy bores me. The characters are functional more than involving. The plot is an interesting mix of ideas, but it’s the action that drives everything. Because of the strength of the action scenes almost entirely on their own do I actually like this movie.

4 thoughts on “The Matrix Reloaded”