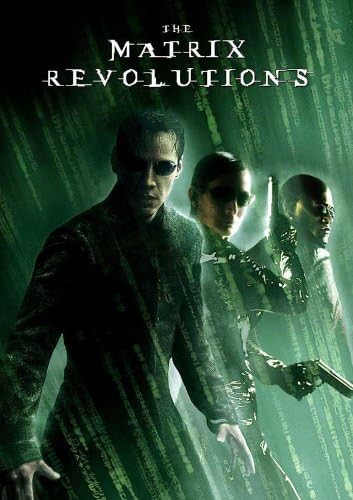 #2 in my ranking of The Matrix franchise.

For a solid while this is probably my favorite Matrix movie. Its final act doesn’t work as well as the rest, but up until that point the action spectacle works probably better than at any point in the franchise. I think it helps that most of this movie is set outside the Matrix and in the real world so the unimaginative choices of the previous film and the cleaner aesthetic don’t really touch this one.

I made the observation when writing about The Matrix Reloaded, but I think it bears repeating: It’s amazing how badly both of these sequels start considering the great start to the first film. You’d think that that original great opening indicated that the Wachowskis knew how to ease an audience into an adventure, but I wouldn’t be surprised if the original script was subject to a series of rewrites to tighten things up that the sequels were never subjected to. So, there’s about twelve hours until the machines reach Zion, and Neo is in a coma after exhibiting some new powers over the machines outside the Matrix. In order to get Neo back, Morpheus and Trinity need to go on a fetch quest to find the Merovingian which involves a chase through a subway to get the Train Man, and an action scene that, while I do like it, feels like a repeat of the lobby fight in the first film. By the time the Merovingian is telling Trinity to bring him the eyes of the Oracle, the audience should be cheering when she undercuts everything by pointing a gun at his head and demanding what she wants. The extended dialogue scene that leads to the quick resolution is so ultimately pointless that it’s a giant waste of time at the opening of an action spectacular.

It takes too long, but the movie finally begins when Neo gets rescued and he needs to take one of the final two ships to Machine City. The other ship will go to Zion and offer support to the fight against the machines. From this point to when Neo faces off Smith in the final confrontation, I think The Matrix Revolutions embraces everything that works best about these movies: action spectacle. And, on top of that, the character work involving all of the side characters ends up paying off because we have characters with motives and goals that are understandable and not steeped in philosophical meanderings.  The Kid just wants to help, so when he gets to help and contribute it works. Zee just wants to see her husband Link again, so when she can go to the dock to help in the chance that she’ll get to see him again it works. It’s not deep stuff, but it’s basic character work that was largely missing from the second film in favor of philosophical conversations that drag the film down.

The flight of the final ship, the Hammer, is taught, but it’s the actual fight in the massive domed dock as the thousands of squid like sentinels flood in against the machine gun fire from giant mech suits that works best. It’s a huge battle that simply looks fantastic as the nearly white interior gets steadily more hellish as it darkens and fires break out everywhere. The visuals almost get painterly at times with wonderful compositions and contrasting colors. Combined with the basic character work at play, it is one of the most fully successful action sequences in the series. The fact that it’s so heavily CGI at the same time is kind of amazing.

And then…we need to feel something as Trinity dies. So, a Smith who had possessed a real person blinds Neo, Neo kills him anyway because he can see the machines, Neo and Trinity fly to Machine City, barely get through, and Trinity dies as they crash. The long listless speech that she gives him about their love while she dies falls so hilariously flat because the romance between the two characters was never even close to convincing. And yet, the way the scene is written it feels like the Wachowskis had figured they had written one of the great romances. Neo goes to the machines who take his offer of peace for him to fight Smith who’s taken over the Matrix by taking over every individual and program inside it.

Now, the idea of Smith in these sequels is something I really like. He represents Neo’s opposite. Where Neo is the embodiment of pure individual free will, Smith represents the collective machine where everyone is the same. It’s a great contrast that gets surprisingly little dialogue treatment considering how much everyone talks about everything else in the sequels. However, the final fight, while wonderfully filmed, ends on such a weird note that must have some kind of explanation that I’m missing. Smith absorbs Neo, and that destroys all of Smith. I guess it’s the collective ideal not being able to function with such a purely individualistic sacrifice and choice being absorbed. I guess, but I don’t think it works dramatically. It’s weird. I don’t like it.

And then the movie does another thing that bugs me about these movies and keeps the individuals trapped in the Matrix as an esoteric ideal rather than a dramatic reality. When the Smiths all get destroyed, based on the re-emergence of the little Indian girl/program that was introduced at the very beginning and absorbed by Smith halfway through, the people he had controlled were freed. And yet, despite having absorbed every person in the Matrix, presumably billions of people, we don’t see a single one of them. We get a conversation between the Oracle and the Architect about them. Again, it’s more talk where some showing would have been really well deserved. For all the talk about the fight to free the people from the system of control that is the Matrix, there’s shockingly little concern for anyone actually plugged into that system. It’s a fight over esoteric ideals in the end, not people. Which is why the dock battle works because that is a fight about some individuals fighting to survive.

Yeah, most people dismiss this movie completely, but I think its middle section works almost as well as the best of the original The Matrix. The beginning is frustrating and the ending as well in different form, but the film is really dominated by the middle where it works really well. Like all of them, this could have been better, but on the whole, I think The Matrix Revolutions ends up being a pretty good action spectacle.

2 thoughts on “The Matrix Revolutions”