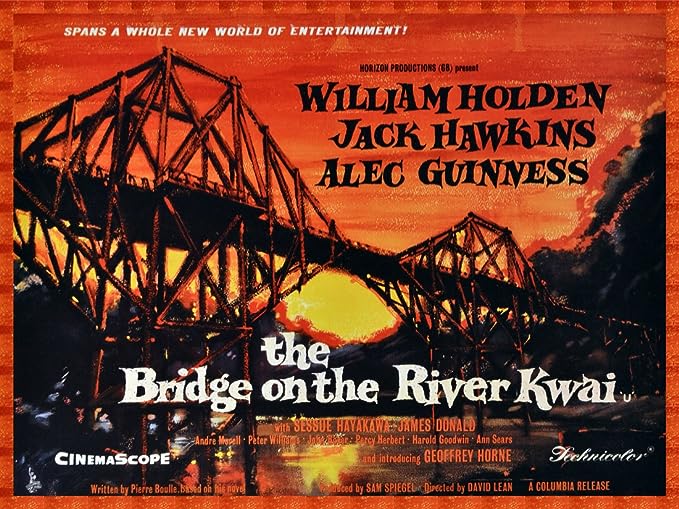 #2 in my ranking of David Lean’s films.

This is a great example of what can happen when a director takes years to learn his trade as well as how to build a narrative before being given something big. Lean’s longest movie up to this point had been Great Expectations at a grand one hour and fifty-nine minutes. His movies up to this point were small, even when they touched on bigger things like aviation in The Sound Barrier, and they were focused on characters dealing with emotional issues. He used a lot of plays as source material, but he was also expanding his ability to tell stories visually as he went, capping it off with Hobson’s Choice. Then he gets the job to direct the adaptation of Pierre Bouelle’s The Bridge on the River Kwai, his first “big” movie, and he applied every lesson he had ever learned. And it shows.

The Bridge on the River Kwai is a great film with great writing, great performances, and great cinematography that uses great framing to do several great things. This is the work of a professional filmmaker who spent decades learning his craft and applying those lessons in spades to a story with a much broader scope.

It’s World War II and a group of British prisoners of war led by Lieutenant Colonel Nicholson are marching to the newest prison camp deep in the Burmese jungle run by Colonel Saito. It’s the conflict between these two men that defines the action of the first half of the film and frames the second. Nicholson is a British officer who insists on duty to the regulations, and when Saito informs him that the British officers will join the regular soldiers in physical labor to build the eponymous bridge Nicholson refuses because it’s in direct contradiction of the Geneva Conventions. Saito, needed to save face after having given a command that won’t be obeyed enters into a month-long campaign of punishment for Nicholson and his officers until they submit to Saito’s will. However, the Japanese efforts to get the bridge up with British labor keep failing and the deadline keeps approaching. Nicholson’s greatest asset is time, and Saito’s greatest enemy is time. Eventually, as Nicholson holds out, Saito caves, couched in terms that thinly maintain the fiction that he’s doing it of his own volition instead of under duress, but the relationship between the two men has flipped.

So, up to this point, the film is great. The Ceylon locations look green and sweaty. Alec Guinness and Sessue Hayakawa are great as Nicholson and Saito. However, it’s the scene where Nicholson takes control from Saito that really stands out. Saito brings Nicholson into his hut after Nicholson has spent about a month in the oven, a hot box in the sun, and offers him some corned beef and whiskey, both of which Nicholson refuses. They talk, and it becomes obvious to Nicholson that Saito is desperate for the work to continue and for it to continue well. There’s a moment where Nicholson finally picks up the glass of whiskey and starts drinking when he knows he has control. He refuses everything until he has power over Saito, and then the movie shows the other side to Nicholson’s madness. He’s so to the rulebook that prisoners should work well, that they should retain military discipline, and that escape from their bit of hell is impossible that he takes up Saito’s mission of the bridge as his own. He organizes his officers and comes up with better blueprints, a better location, and better plans for work details in order to try and get the bridge done on time. The meeting where all of this is laid out shows Nicholson ordering drink and food, nominally through Saito, while he strolls around the room and Saito sits dejectedly at the other head of the table, knowing he has no power in his own camp anymore.

At the beginning of the film we were introduced to an American officer Shears who is digging graves at the camp for the last of the main workforce that built it. He escapes from the camp early and spends about the first half of the movie getting to an Allied base, barely alive. When the movie reaches its second half, he takes over and becomes the focus. We find out that he had been lying about his rank of commander, that he’s just a petty sailor, and that he was happy to keep up the fiction if it got him some time with the pretty nurses. Well, none of this is news to the British commando force near the hospital who have liaised with the US Navy and gotten Shears assigned to them with the rank of major in an effort to help cover up the Navy’s embarrassment at having celebrated a man who lied about his rank for making an impossible escape.

Shears goes in with three others, Warden, Joyce, and a third who dies on the parachute jump in. The three remaining commandos go deep into Burma with some local guides until Warden gets shot in the foot in a standoff with some lone Japanese soldiers. It’s here that Nicholson’s madness towards duty gets replicated in Warden. Warden has spoken of giving up an injured man to the jungle because the mission is the top priority, but Shears, who had seen the beginnings of Nicholson’s fight with Saito, understands madness when he sees it and refuses to leave Warden behind. His injury gets so bad after a certain point that he has to be carried, but still Shears refuses to leave the man behind.

Reaching the bridge, the commandos operate under the assumption that the British have completed the work under duress, not that the British had taken control of the project and done it as well as possible. The effort to mine the bridge is a marvelously tense scene as Shears and Joyce take a raft in the middle of the night (in some of the most convincing day for night photography) under the bridge with an active patrol on top, strap the plastic explosives to the pilons, and extend the detonating wire a few hundred feet down the river bend. It’s intercut with Nicholson enjoying a show from his men in celebration of the successful completion of the project, a wonderfully ironic counterpoint. Morning comes, the men march over it to the next camp, and Nicholson stays behind the witness the opening ceremony that will be quickly followed by the passing of an important train. The tension mounts as the wire becomes visible in a couple of different spots, and it’s Nicholson who finds it, investigates it with Saito in tow, and even fights with Joyce after Joyce stabs Saito in the back. It’s the reappearance of Shears, swimming across the river to try and depress the plunger to the explosives himself, and his death at a shot from the incoming Japanese infantry from the bridge that suddenly wakes Nicholson from his stupor. He realizes what he’s done and lands his whole dying body on the plunger, exploding the bridge just in time to down the train as well.

The central idea of this movie could be boiled down to the word madness, but a broader look at it could lead to one saying that it’s blind adherence to regulations and rules in the face of other, more important, obligations. At the same time, I think that overall theme is built on the foundation of the running motif that comes out in many of Lean’s films, the idea of the temporary giving way to the permanent. In Brief Encounter that was a quick romance giving way to established marriages. In Summertime that was love as a season, finding its natural conclusion. In The Bridge on the River Kwai it’s the bridge itself needing to suffer in the face of the larger conflict. The bridge, no matter how much Nicholson dreams of it being a permanent fixture in the Burmese jungle, has to be destroyed because the larger war demands it. Nicholson’s final realization at the potential harm he’s done to Britain and the war effort is his coming back to reality, a powerful moment and a great way to end the film.

The movie is just so expertly made from beginning to end. Aside from the narrative success of the film, it’s simply great to look at. There’s a great example of the very open feeling of the film at the commando headquarters. This could have been a simple office space for two to five people to sit around and talk about what’s going to happen, but the walls are open and looking out over a beautiful valley, helping even scenes of heavy dialogue pop visually. The central set of the bridge is huge and impressive, and to see it literally destroyed with a train falling off of it at the same time is a great piece of visual spectacle filmed expertly and clearly across different angles. Guinness, Hayakawa, William Holden, and Jack Hawkins are all great giving professional and dedicated performances.

It’s just a great movie all around and one of David Lean’s best.

2 thoughts on “The Bridge on the River Kwai”