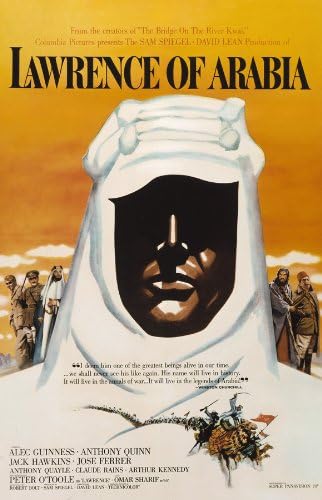 #3 in my ranking of David Lean’s films.

This is one of the titans of cinema. A movie so large in scope and in reputation that it becomes a bit of a hopeless exercise to talk about it because so much has already been said. Widely regarded as one of the greatest films ever made, David Lean’s epic portrait of T.E. Lawrence is a monument of what an epic can be in terms of scale and sweep that it often gets overlooked that at its core is a rather telling story of a man’s descent into a madness, much like Colonel Nicholson’s own descent in The Bridge on the River Kwai. It’s also a piece of historical fiction that may or may not have a whole lot to do with the actual characters involved. Some family members were so aghast at the portrayal of General Allenby that they lodged a formal complaint with Columbia Pictures.

Based on Lawrence’s own account of the Arab Uprising in the First World War, Seven Pillars of Wisdom, the movie begins with Lawrence’s death on a small country road in England, jumping back in time to his days as a lieutenant and clerk under General Murray. One thing to be said very early about this film is its incredible use of transitions. The most famous one is of Lawrence blowing out a candle and the film instantly cutting to the shot of the rising run over the desert, but I think the transition from the funeral to the small basement office where we find the young Lawrence is indicative of Lean’s control over editing from his years as a leading editor in Britain’s film industry.

We go from General Murray talking to a reporter about how Lawrence had some minor position on his staff in Cairo to a shot of a hand coloring a map. Based on the dialogue we just saw and the sudden change in visuals, we instantly know that we’re not only somewhere else but that we’re in Cairo and that hand is Lawrence’s. We don’t need a long establishing shot of the city to understand exactly where we are and when we are. We know that we’re at a point before Lawrence got famous because of how Murray talked about Lawrence’s insignificant position there. It’s instantly conveyed in a single cut, and it’s a great use of the tools of cinema.

Now, a comment about the film’s length. It’s just shy of four hours, and I think it earns every minute. The first hour or so builds up to several things, selling the reality of each of them to the audience. The first is Lawrence’s vision. He sees a united Arab population in Arabia able to govern itself. The second is the reality of the desert. It’s hot, it’s big, and it’s punishing. The third is the political reality of the different Bedouin tribes that make up the Arab population and how they are almost always in conflict over some reason or another. Those reasons don’t matter to Lawrence, of course, because his vision is what’s important.

Lawrence’s inability to see reality because of his vision is really at the core of everything in the movie for him. It’s most obvious in his desire to become an Arab, something that’s never really said explicitly but shown repeatedly especially at his lowest moment when he reveals his white skin to his friend Sherif Ali late in the film after his torture at the hands of the Turks. He had snuck into a Turkish controlled village thinking that he was invisible dressed as an Arab, able to simply disappear amongst the locals, and he was found out easily. He’s not an Arab, and he never will be. It manifests other ways like in how Lawrence fought against the cruel impulses within him but he cannot deny them. When he executes a man, the very man he had saved from death in the desert, he’s horrified that he actually enjoyed the act. He runs from that until the final charge against the retreating Turkish column towards Damascus when he orders an attack that’s not necessary and he gets into the thick of the battle like he had never done before, getting covered in blood much to Ali’s horror.

The final big fantasy that falls apart is Lawrence’s vision for the Arab world. It ends up falling apart for two reasons, one internal and the other external. The first is that the Arab world of Bedouin tribes are simply not cohesive enough to come together. Presented with their first seat of government in Damascus, they can do nothing but bicker over slights both current and past. There’s going to be no way for them to come together the way they need to in order to overcome the external forces of Britain and France coming to an agreement to split the Turkish Empire, including Arabia.

Underlying all of this is the common motif in Lean’s work of the temporary giving way to the permanent. Lawrence’s vision gives way to the original reality of the tribes fighting each other. They were together momentarily because of the war, but it falls away as soon as it’s over. Lawrence’s embrace of his deep tan on his face and the dressings of a Bedouin give way to his white skin underneath and the uniform of a British officer. He goes through these massive events, and in the end very little seems to have changed. The Arabs still are disunited and under a colonial power, England and France instead of the Turks. Lawrence has led the Arab army, but he still has to go home to England.

The movie is simply impeccably made, the result of a craftsman learning his trade over decades and applying the tricks of that trade intelligently. The opening up of his camera that began in The Bridge on the River Kwai goes exponentially further in Lawrence of Arabia. Vast vistas with tiny figures feature prominently throughout the film, and they never feel extraneous. These are moments where the hugeness of the desert needs to be sold to the audience. The smallness of the characters needs to be felt acutely. The journey across the Nefud Desert needs to feel arduous, dangerous, and deadly, and you can’t do that in a couple of quick shots. Letting those moment linger as the audience begins to feel the heat of the sun on the Sun’s Anvil is key to selling the audacity of the plan Lawrence had pursued with Ali to reach Aqaba by land. The action needs to feel big, bold, and monumental. It can’t feel easy. Lawrence needs to suffer through it, and showing the audience the hugeness of the expanse is part of doing that.

David Lean grew up in the industry with his small films about people, usually married people dealing with marital problems. That focus gave him a great gift with actors, something one might not expect from a director who arose from a technical field like editing, and he applies that gift to every actor in Lawrence of Arabia. The newfound Peter O’Toole won an Oscar for his performance as Lawrence, and he deserves it, showing us a flawed man who grows to believe his own myth and has it come crashing down. A man who is at war with his own impulses and his own desires. Omar Sharif is wonderful as Sherif Ali, the companion who grows to understand not only Lawrence’s greatness but his great flaws as well. Alec Guiness in brown face is great as Prince Faisal, the closest thing the Arabs have to a leader, with cool, intellectual control of every movement of a king to be. Jack Hawkins embodies the smugness of General Allenby perfectly. Anthony Quinn is maniacal, violent, and deeply felt as Auda abu Tayi. Universally, the cast is fantastic.

The music is strong from the young Maurice Jarre with a theme that seems instantly recognizable decades later. The battles are filmed clearly and from afar, showing off the incredible scale of the production without ever losing sight of the intimate feelings of the characters at the center.

It’s a production of the highest order with an intelligently told study of a man at its center. This is more than just a critics’ delight, this is grand entertainment.

11 thoughts on “Lawrence of Arabia”