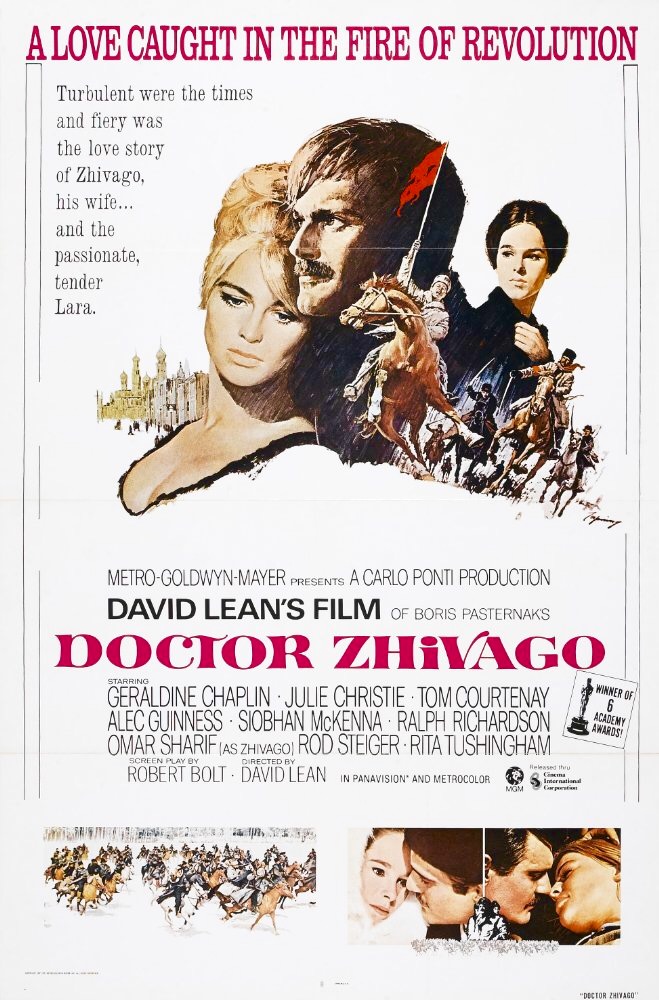 #15 in my ranking of David Lean’s films.

The initial critical reaction to David Lean’s Russian epic is far different from the reputation that’s come up. Instead of the well beloved and sweeping romance that modern audiences seem to see, the first critics found the film fractured and the romance unconvincing. After my second viewing of the film I have to agree with the initial critics.

I was ready for my second viewing in about fifteen years to reverse my initial opinion that Doctor Zhivago was a largely ornate construction with little actual emotion, but I couldn’t do it. The movie is beautiful to look at from opening frame to closing, but the titular character is so incredibly passive in the face of the larger plot of the fall of the Tsars, the October Revolution, and the ensuing civil war that he just gets shoveled from one major look at life in Russia to the next with little agency of his own. On top of that, the romance between Zhivago and Lara is so thinly built and ignored for such long stretches that when the film finally gets to focus on the two together none of the necessary building blocks are actually there and it feels like we wandered in during the third act of another movie.

The opening hour of Doctor Zhivago reminded me of the opening hour of Fanny and Alexander. It was a big, ornate display of production design and a bevy of characters revolving around each other, and it felt like a great way to start a grand, sweeping, historical epic. Omar Sharif is Zhivago, the soft spoken poet doctor just out of school who is entering general practice. Julie Christie is the beautiful Lara, the daughter of a woman being used by the manipulative Komarovsky played by Rod Steiger who uses her as well for his own ends. Tom Courtenay is Pavel Antipov, Lara’s fiancé and a dedicated Menshevik who hates the Bolsheviks and is also ready to overthrow the Tsars. Geraldine Chaplin plays Anna, Zhivago’s fiancée, a dedicated quiet woman, and Ralph Richardson plays her father.

Komarovsky loves Lara, but when Lara declares her intention to marry Pavel, Komarovsky rapes her in revenge which leads to her carrying his child. She goes to a party where Komarovsky is, where Zhivago and Anna are also in attendance, and shoots Komarovsky in the arm. Pavel takes her away without anyone pressing any kinds of charges. This single event gets referenced several times through the film after years of bloodshed and oppression, and it’s the first building block of the romance that’s supposed to develop between Zhivago and Lara. They don’t interact, but he saw her.

Several years later, in the middle of World War I, Pavel has been reported dead, so Lara volunteered as a nurse to go to the front. As she and her unit are returning they come across the column of troops where Zhivago is serving as medical officer. Her unit, tired from the fighting, kill the officers in the other column and recruit the rest of the troops to return to Mother Russia, leaving behind Zhivago, in one of two real moments of active participation in the larger plot from him, who chooses to stay to look after the wounded, and Lara who does the same thing. They end up together for six months in a hospital looking after the wounded, a period that is completely skipped over. Now, at the moment of seeing this, I was okay with the choice. I figured there would be more building blocks along the way for the romance, and that their separation built on a single scene of dialogue was a good starting point, but since the movie ends up skipping any other real building for their relationship this is it. And I find it incredibly disappointing. There’s no build for the relationship here. It’s Lara telling Zhivago that they have nothing to be ashamed of in their relationship while Zhivago looks at her lustily from the shadows. Nothing actually happens. This is over an hour into the film, and they don’t come together again for over another hour. In this grand romance of a film, the two central romantics share a single real scene in the entire first two-thirds of the movie.

Concurrently with this romance is the story of the revolution. This is the sort of grand epic looking affair that we’ve come to expect from Lean, but there’s a problem. As I said before, Zhivago is our vessel through these events, but he’s incredibly passive. He gets moved from one place to another and it never feels like his own choice except here and there. When he shows up in Moscow after the war to discover that life has completely changed, he simply takes it. When it’s time to move out of the city, it seems to be his choice based on some later dialogue but we don’t see him making that choice. He’s just one of thousands being shoved into cattle cars for transportation. When he gets picked up by partisans, he just goes along after they grab him. There’s a certain reality to that, but at the same time it doesn’t make for terribly convincing or engaging drama. He feels like an empty vessel through which world events must flow, not like a character making his own choices and performing his own actions, and that makes for uncompelling drama.

So, Zhivago and Lara meet up again after he moves his family to the country. Happy with his pregnant wife, son, and father-in-law, he happens upon Lara in a bookshop and they immediately jump into bed. It’s here where I figured that something was wrong with the romance. These two had shared a single meaningful scene in the movie’s first two hours, and then when they meet again they’re throwing themselves at each other physically. There’s something missing. This isn’t the second act of a romance, this is the third. It skipped some steps. This is where I discovered that the big scene of Zhivago in the shadows with Lara was supposed to be not an introduction to their romantic feelings but the full embodiment of it before physicality took over, and it’s thin. There was more talk of feeling than actual feeling, and it was over so long ago that I found the sudden explosion of emotion to fall flat. And the movie never really moves on from there, taking their romance for granted instead of developing it.

She’s a side character, but I think it should be noted that Anna’s reaction to her husband’s affair happens entirely off screen. All we see of it is a letter she wrote months before that Zhivago reads where she is desperate to get him any news so she sends the letter to Lara. We have no idea how she accepts or rejects this relationship against the reality of the world crumbling around them. It’s a small point regarding a minor character, but I think it helps highlight the movie’s failings regarding building emotion and interweaving it with the grander plot. It takes everything for granted instead of actually working to build it.

The movie’s real successes are technical in nature. It looks great, as I’ve written, but the editing is as economic and informed as what Lean did in Lawrence of Arabia. The best is right before the movie’s intermission where we discover that Pavel hadn’t died in the Great War, but that the soulful poetic student had become a monster of the revolution as a local woman notes the passing train as being owned by Strelnikov, a sadistic officer, and we cut straight to the easily identifiable scarred face of Pavel. Lean might have lost the plot, but he lost none of his technical ability. The recreation of the last days of the Tsars, the trenches on the Ukrainian front, and the reality of life under communism in Russia are impeccably presented and convincing. I just wish the story supported it all.

I wouldn’t be as abrasive as Pauline Kael when she said, “This banal suggestion that the suffering has all been for the best and that tomorrow will be brighter is not only an insult to the audience, it is a coarse gesture of condescension and appeasement to the Russians.” It’s one of the reasons I don’t really like Kael as a critic, but I do agree when she says, “it’s stately, respectable, and dead.” Even Roger Ebert in his own positive review written thirty years after the initial release says, “I agree that the plot of Doctor Zhivago lumbers noisily from nowhere to nowhere. That the characters undergo inexplicable changes of heart and personality. That it is not easy to care much about Zhivago himself, in Omar Sharif’s soulful but bewildered performance. That the life of the movie is in its corners (the wickedness of Rod Steiger’s voluptuary, the solemn pomposity of Tom Courtenay’s revolutionary). That ‘Lara’s Theme,’ by Maurice Jarre, goes on the same shelf as ‘Waltzing Matilda’ as tunes that threaten to drive me mad.”

A final note: Lean’s filmography is filled with a thematic focus on the temporary giving way to the permanent. This actually gets completely inverted in Doctor Zhivago with the temporary (the Marxist Revolution) completely wiping out the previously permanent situation of the pre-revolutionary Tsarist society that was Russia. The result is destruction, chaos, and death. At the same time, Zhivago gives up on his marriage to Anna in favor of Lara, and they still end up separated and Zhivago dies alone chasing Lara down the street as she walks without his knowledge. The inversion is an interesting direction to go, but still, I think Lean’s Doctor Zhivago is a deeply flawed film.