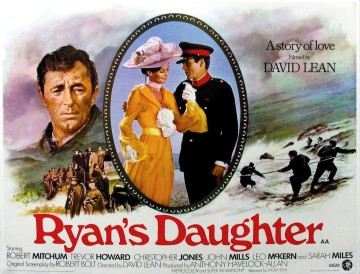 #14 in my ranking of David Lean’s films.

The initial negative reaction to Lean’s Ryan’s Daughter was too harsh, I think, but the reappraisal as a neglected masterpiece is overdone. There’s some very good stuff in here, but the weight of the film around that stuff is simply too much, grounding a rather small film in heavy scope that it doesn’t need. This feels like a compromise between Lean’s early work like Brief Encounter and his grand sweeping epics, but where something like Doctor Zhivago felt overwhelmed by historical detail, Ryan’s Daughter feels like the historical detail is incidental and unimportant to the actions at play. There are added subtexts, but nothing that couldn’t be had in a much tighter two-hour film rather than this bloated three-and-a-half hour one.

There’s very little in this film that’s actually bad (though the small Irish town’s propensity to rove around as a unified and faceless gang is certainly one negative aspect of the overall picture), but the problem is that there’s just so much that ends up adding so little. The first hour is the introduction of two-thirds of the love triangle that dominates the rest of the film. They are Rosy, a young girl afraid of the physical aspects of marriage while the local priest tries to convince her to marry, and Charles, the local schoolteacher, well Rosy’s senior, that she marries. Charles is a good, decent man, but there’s little passion in the well-made match. Rosy is crestfallen, thinking that the sexual act was going to change her on its own like giving her wings, but the sex is underwhelming. She doesn’t know what to do in this newfound situation.

Now, this hour of film ends up covering very little ground, and, while I wrote that none of it is really bad, very little of it is terribly necessary. We don’t need this hour of detail where a tighter, more focused handful of scenes could have provided all of that information at the same time. I don’t want to fall into the argument that efficiency is the highest goal of storytelling, but artists do need to weigh what they are saying with how long it’s taking them to say it. The difference between what is said and how long Lean is taking to say it in this first hour is so out of balance that I question the thinking behind the decisions.

The second hour introduces Major Doryan, an English military officer sent to the area to take over the garrison there in the sleepy corner of Ireland. Played by Christopher Jones, who was apparently dealing with depression after the death of Sharon Tate, Doryan is a bit of an enigma who mostly stares, but I think the performance works in the beginning. His deep sadness in that remote part of a foreign country away from his pretty wife presents a character so emotionally broken that it makes sense that he would jump into bed with the first pretty woman who gave him the opportunity. On the other end is Rosy, suddenly trapped in a passionless marriage and presented with an attractive young man in a uniform who looks at her with desire in a way that her husband never does. Their sudden affair makes far more sense than the affair that springs up between Yuri and Lara in Doctor Zhivago.

However, Jones’ diffidence in his performance doesn’t serve him that well through the rest of the film, though. Instead of feeling passionate, he feels disengaged to the point that the big love scene between Rosy and Doryan is so fractured (apparently at least partially because Robert Mitchum drugged Jones in an effort to get him to do the scene at all since he didn’t like Sarah Miles who played Rosy) that, while pretty, is shockingly inert. The affair that develops does not escape Charles’ notice, or that of the town. Almost instantly everyone realizes that Rosy is having an affair with the new British officer, most likely because of the notice of the village idiot, Michael.

A quick note about John Mills. He was a wonderful actor, but this character of Michael is beneath him. He’s a mentally challenged middle aged man with bad teeth who smiles and frets at the slightest provocations. It’s honestly a poor part in general, and Mills should have passed even if it meant hurting the feelings of his long time friend and collaborator Lean.

Parallel to all of this is a very small story of some IRA gunrunners who show up to the area, kill a policeman (an action that’s never referenced again), and generally look nefarious. They honestly don’t do much but act as a frame for the larger story of The Troubles, a subplot of such little actual importance to the film that it could have easily been cut. They disappear for long stretches and only really make their mark deep into the third hour when they arrive to claim some guns from Germany that were offloaded just off the coast in the middle of a storm. This storm sequence is probably the single most famous part of the film, and it looks great, like pretty much everything else in the film. Filmed during a real major storm off the Irish coast, it brings dozens of extras as they run to claim boxes from the sea.

Now, when I say that the gunrunner subplot is pretty much a waste of time, I’m really talking about the characters themselves. The effects of their presence have a real effect on the story, mostly in how the town ends up re-evaluating Major Doryan and, in particular, their feelings towards the small scandal of his affair with Rosy. When Doryan stops the shipment of guns and shoots the main gunrunner, the town turns on him, but since he has a small force of guns at his back, they turn their ire on Rosy. The gunrunners are ideals to the townspeople, not specific individuals that this faceless mask knows, but the effect is there as they break into the schoolhouse and cut her hair and strip her naked. Doryan ends up so depressed that he takes some detonators and explosives and blows himself up while Charles and Rosy find a way to forgive each other and move away.

I can easily imagine the David Lean of the 40s taking this same story and adapting it into a strong two-hour film. The first hour would be covered in no more than fifteen minutes. The affair would be less explicit. The gunrunners would be more individualized, and the townspeople would contain actual characters instead of moving as a mass at all times. Very little of the actual story would be different, but the story would regain a simple focus that this real version is lacking. Some directors seem to forget how to make certain movies after they go big. Peter Jackson couldn’t make a small story of a dead girl looking down on her life in The Lovely Bones after he made The Lord of the Rings and King Kong, he had to fill it with special effects that didn’t fit. Francis Ford Coppola went through similar problems with One From the Heart after Apocalypse Now. And David Lean simply forgot how to tell a small story after The Bridge on the River Kwai, Lawrence of Arabia, and Doctor Zhivago.

But, as I said, very little of the film is actually bad. It’s simply too long, a complaint I very, very rarely make. The more than three-hour length isn’t necessary to tell the rather small story of a woman marrying passionlessly and having an affair with an attractive British officer. The framing of The Troubles helps to build the difference in her choices, but the movie doesn’t need that much of a focus on it.

Since I’ve made such a fuss about the idea over this review of Lean’s career, I should note the thematic material that fits in with my overall thesis of Lean’s themes. There are two permanent things at play here: the Irish as they exist in the early 20th century, at least partially under the heel of the British, and the marriage of Charles and Rosy. The temporary states are the IRA fighting the British and the affair between Rosy and Doryan. Both come tumbling apart, and, in particular, it’s the marriage of Charles and Rosy that helps Rosy find a way forward after the events of the film.

So, while I felt like the movie was too long pretty much from the hour point on, I was still mostly enjoying the experience. I think it was the late introduction of the gunrunning plot and the storm that pulled me down just a bit more. This is definitely not Lean’s worst movie. It’s simply too well made for that. However, it is definitely the lesser work of a filmmaker who’s lost touch with what made him great to begin with.