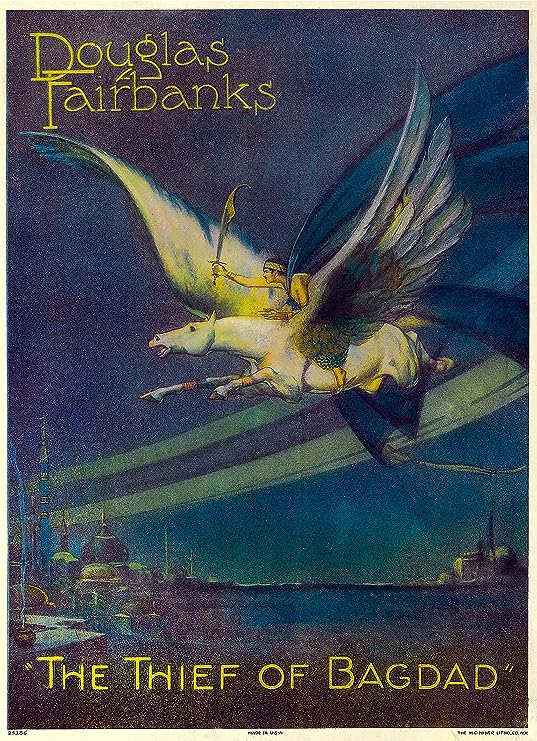 Silent cinema wasn’t just arthouse fare and comedies. Audiences wanted adventure and action as much then as they want it now, but these types of movies tend to age more poorly, especially silent versions, because of an over-reliance on plot mechanics when tends to slow things down to a series of intertitles as people explain things to each other. The best of these kept their emotions simple and the adventures grand, and The Thief of Bagdad is an example of the best of these.

Douglas Fairbanks plays the titular thief, and we spend the first major section of the movie getting to know him. He’s a curious mix of dashing, charming, and cheerfully unethical as he brashly steals from anyone and everyone. It’s hard not to like him despite his constant thieving, but Fairbanks’ winning smile and boundless energy really helps sell the character to the audience. However, this is far from the character’s end point, as can be foretold by the opening graphic over the Arabian desert where the stars spell out that you must earn what you get, and by the thief’s trip to a mosque where he derisively laughs off the lessons of hard work and patience taught there. He takes what he wants, and he doesn’t give a fig for hard work.

He breaks into the palace to steal what he can when he sees the princess who’s set to marry one of three visiting princes from across the East. He becomes so smitten with her, but he cannot just steal her, so he dresses up like a prince to get close and win her affection (hey…wait a minute…). He even touches the rose tree as the prophecy had told the princess her future husband would do. The prince from the Far East, though, figures out that this Prince of the Seven Seas isn’t a real prince, unmasks him, and gets him cast out after the princess chooses him. Left with only the three men she finds repulsive in different ways to choose from, the princess tasks all three with taking seven months to go out and find the rarest treasure on Earth and bring it back to her as a present. The thief, woefully sick at losing his great love, goes out on the quest as well.

Everything up to this point has been light, magical, and fun. There are magic ropes that the thief can climb up and down. There’s the thief’s coconspirator who plays wingman and covers for him when the thief sneaks up to the princess’s window. It’s all so very engaging, but when the movie switches to the quest, things go into overdrive. The thief goes through giant caves, battles a giant lizard, swims down to the bottom of the ocean where he refuses the advances of a harem of women, climbs up to the peak of an ethereal temple, and claims the magical box under an invisible cloak. It’s all done with the height of silent cinema’s tools, using double exposures, giant sets, miniatures, and puppets to sell the adventure’s most dangerous moments, and through it all is Fairbanks. Never daunted, always smiling, Fairbanks is a ray of light through the entire film, offering his physical and gusto performance no matter what, fitting perfectly with the over the top and fantastical silent adventure he’s surrounded by.

As the thief goes to get the magical box, the other three princes find a magic carpet, an orb that can see long distances, and a golden apple that cures all ills. The prince from the Far East conspires to have the princess poisoned, and the three princes uses all three tools to see her plight, fly to her, and then cure her, each one claiming that the magical tool they used was the rarest earning them the princess’s hand. And yet, the orb shows her that her true love is returning with the magical box, which he uses to create armies from the earth and overrun the defenses that the prince of the Far East had clandestinely set up throughout Bagdad in the preceding seven months.

It’s classic, silent Hollywood at its height. It’s fun, imaginative, and with a winning performance at its core.

3 thoughts on “The Thief of Bagdad”