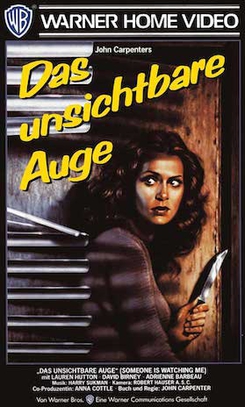 #16 in my ranking of John Carpenter’s films.

Made before Halloween but premiering on television a month afterwards, Someone’s Watching Me is John Carpenter’s tribute to Alfred Hitchcock. It seems like most directors born between the 40s and the 60s felt like Hitchcock’s influence was so important to them that they all wanted to replicate his style of filmmaking at least once (or, in Brian De Palma’s case, all the time). Scorsese had Cape Fear. What Lies Beneath was Zemeckis’ effort. This television movie was John Carpenter’s.

Leigh Michaels (Lauren Hutton) moves to Los Angeles and into the Arkham Towers apartment building. She quickly finds a job at a smaller local television station as a live television director and becomes friends with Adrienne Barbeau’s Sophie. At the same time Leigh begins receiving weird phone calls from a man she can’t identify, and she receives notice from a company called Excursions Unlimited that she’s going to win a six-month paid vacation if she can identify the location of the trip based on the series of gifts that will be sent to her. While figuring this new city and situation out, Leigh meets Paul (David Birney), a philosophy professor with whom she begins a relationship.

As Leigh gets settled in her new life, though, the calls become increasingly threatening, but only in implication. She goes to the police, but the caller hasn’t crossed any legal lines that they could act on. The bulk of the film is this balance between Leigh growing closer to both Paul and Sophie while feeling increasingly trapped by the caller who seems to know everything about her life.

I went through a few emotions as the movie progressed. I was initially a bit frustrated at the lack of any insight into the prank caller, but I happily settled into the solid character work that went into Leigh, Sophie, and Paul. It’s a small film (made in only 18 days mostly on the single set of Leigh’s apartment), and its focus is ultimately in the right place. By about the halfway point, I was fully on board with this descent into psychological torture meant to end in suicide. It was working really well. The phone calls, the electrical problems with the apartment, the presents, the implied threats in the letters, they were all coming together with the characters in a believable and engrossing way. The murder of a key character is terrifying as we watch from across the way, Leigh unable to do anything to help. I was readying myself to declare Someone’s Watching Me as a lost gem of Carpenter’s body of work.

And then the finale began and things just began to feel wrong. The mechanics of a Hitchcockian ending were there, but the important melding of character with those mechanics began to fray. Through some investigative work on their own because the police won’t move to help them, Leigh and Paul go and ask questions of the company that manages the maintenance on the building, finding a name and looking into his work history. They discover some interesting coincidences between when this man was working and a handful of mysterious suicides of young women. They then split up with Paul going to the police and…Leigh going to the man’s house alone. I’m going to be okay with this choice because she’s emotionally at the end of her rope and she wants to do something proactive to end her torment. So, she shows up and immediately breaks into his house, finding the surveillance equipment he’d used as well as the hand-cranked printing press he had used for the Excursions Unlimited letters. Okay, she’s done some questionable stuff, but it’s in line with her character up to this point.

And then…she goes back to her apartment alone. She knows that this guy has gotten into her apartment before and can again, and she decides to go in alone. The only reason for her to do this is to both quickly end the film and to get us the shots of the guy trying to push her out of her high-rise apartment to the street below. She seemed to have felt the need to run back because she had seen an ad in the man’s house for a piece of surveillance that she had found in her apartment, but I could imagine a better resolution where she meets up with Paul, frustrated that he couldn’t get the police to help even with the added information, and they go into the apartment together. Splitting up, Paul gets knocked out, and the rest of the ending plays out better.

The movie really suffers due to its ending, I think. Graham Greene often accused Hitchcock of being a purely mechanical filmmaker when Greene was acting as a film critic in the 30s, and this ending is the sort of thing that Greene was probably seeing (though I wouldn’t agree with Hitchcock’s 30s output). It feels completely artificial, like a screenwriter forcing situations that don’t feel natural to what has come before, and that’s exactly how I feel about this ending. The character work that went into Leigh, Sophie, and Paul is still there in the first hour and twenty minutes or so, but the movie abandons it all in favor of an ending that doesn’t really make sense or feels like it follows from what came before. It addresses the basic plot mechanics of the story while ignoring everything else. It kind of feels like an early draft of the ending, something to write down on paper really quickly before the deadline, figuring that another draft will come along at some point.

That’s disappointing, because the first two-thirds of the film were really good, the sort of character based storytelling within genre that Carpenter was becoming well-known for.

4 thoughts on “Someone’s Watching Me!”