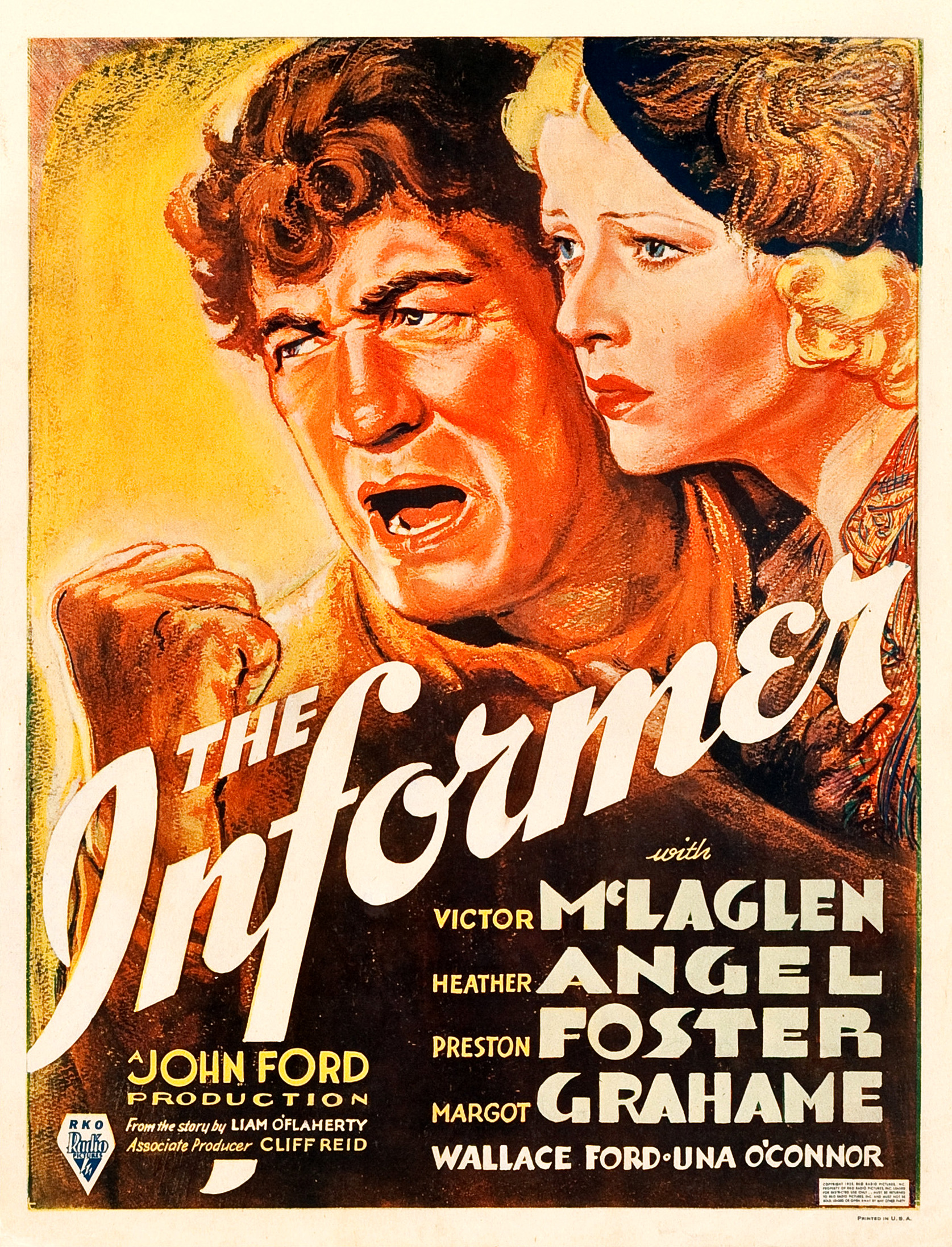 #5 in my ranking of John Ford’s filmography.

John Ford was very busy through the 30s, releasing twenty-five films from 1930 through 1939. In that bevy of output, I think that The Informer stands above the rest. The best movie of this period in his career, a deeply melancholic character study of a man on a path of self-destruction after he does something he himself finds unconscionable. Getting a marvelous performance out of his star, John Ford also made one of the most visually sophisticated films of his career at the same time, creating a complete package of a film.

I kind of feel bad for saying this about Victor McLaglen. He was a mildly successful boxer and rose to a captaincy during World War I, but Gypo Nolan was the role he was born to play. Up to this point, he’d played professional men in The Black Watch and The Lost Patrol with conviction, but there’s something about the big, dumb, brutish, and nice drunk of Gypo Nolan that he portrays rather perfectly. A lot of that, though, has to do with how John Ford directed him, effectively getting him drunk over the few weeks of shooting, including lying to McLaglen about shooting schedules so he’d come in hungover if not outright plastered in order to play the scenes. It’s almost not acting.

Anyway, Gypo is a former low level member of the IRA in 1922 Dublin. He’d been kicked out because he drew the short match one night, giving him the assignment to murder a British officer. Instead of killing the man, Gypo let him go. Now, nobody trusts him, neither the British nor the Irish trust him, and he can’t find work or even much money for food. When his good friend Frankie McPhillip (Wallace Ford) shows up in town on a heavily foggy night, the two meet up despite Frankie being wanted by the British with a twenty pound bounty on his head. Gypo lets Frankie know that the watch on Frankie’s mother’s house had been lifted so he could go and visit her safely, but Gypo is desperate and not very bright. He can’t make a living in Dublin, and his girlfriend Katie Madden (Margot Grahame) has a dream of using twenty pounds to buy each of them tickets to America. Feeling lost, alone, and with no prospects for any further life in Dublin, Gypo gives in and turns Frankie into the police, ending with a shootout that kills Frankie and Gypo getting his twenty pounds.

I think one of the strengths of this film is something that more modern audiences would probably reject. It’s entirely predictable where this is going to go. This is Crime and Punishment in Ireland during The Troubles. There’s an inevitable end point where Gypo will end up, and it’s not on a boat to America with Katie.

It’s inevitable because the IRA captain Dan Gallagher (Preston Foster) and his two lieutenants see through Gypo’s lies from the beginning that he had nothing to do with Frankie’s death. He’s gone from destitute to throwing money around all of a sudden. He can’t keep his story straight. He’s obviously hiding something, but the IRA has a process and rules. Those processes and rules must be followed, and that means a trial in the middle of the night with all the evidence and testimony brought before it.

The evening action follows Gypo mostly, though. He’s completely self-destructive. He wants to spend his twenty pounds on those tickets, but the very first thing he does is break a pound note for a bottle of whiskey that he downs in minutes. He buys drinks for whole crowds, gets into a fight with a policeman, buys fish and chips for another crowd, goes to a whorehouse and pays for drinks there as well. He gives a British woman five pounds to get her home to London and also pays off her bill with her landlady, another four pounds. When he meets Katie in the street, he hands her what’s left, convinced it’s still twenty pounds, and instructs her to buy the tickets. But Katie intuits where the money came from and just drops it on the ground.

When Gypo is brought to the court, it’s one of Ford’s best endings. He’d always been good at bringing together a bunch of elements into quality endings even in lesser films. They had started out with action oriented climaxes, but he’d grown through the 30s to where he could apply the lessons he’d learned to smaller, more character focused conclusions, and The Informer is a fantastic example of it. From the wonderful three-dimensional framing of shots to the re-emergence of the matches for killing assignments to McLaglen’s performance, increasingly desperate as the trial goes on, to the sudden reappearance of Frankie’s mother (Una O’Connor), everything fits together perfectly, ending the story right where it was always going to end.

The Informer is a tragedy, and all the moreso because of the inevitability of its endings. Gypo, being a desperate, pathetic character, can only do so much, and his actions end up completely driven by his guilt. He drinks heavily, spreads the wealth around, and just tries to drown out the knowledge that he had killed a friend himself. Can a man end up happy after that? Should he? Probably not, but maybe he can find some absolution along the way.

The Informer is a brilliant film. A great work from a practiced hand, using an extremely strong script by Dudley Nichols and great performances from everyone involved, John Ford made a small masterpiece.

5 thoughts on “The Informer”