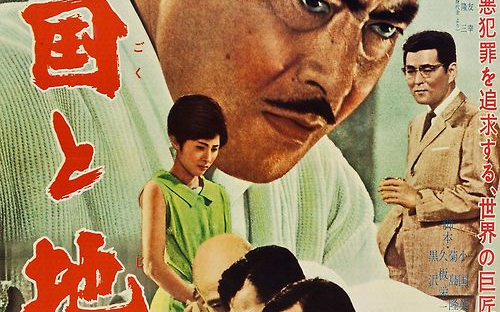 #10 in my ranking of Akira Kurosawa’s filmography.

This is a mixture of two film genres that end up complimenting each other rather perfectly. The main character disappears from half the movie, and yet it still works. This is one of Kurosawa’s most experimental films, and it’s couched in seemingly straightforward styles of storytelling, a character drama and a police procedural that are both kept fairly separate and yet intertwine together expertly at the same time.

The film begins with an informal business meeting in the house of Kingo Gondo (Toshiro Mifune), a director of the National Shoe Company, with three other directors who want him to go in on a plan to push out the “old man” who owns a plurality of the stock by coming together. The problem is that Gondo does not like their plans for the future, using cheaper materials to make less reliable shoes, and he’s turning everything around on everyone else. He’s been secretly purchasing stock from other stockholders for a few years, putting everything he owns up as collateral for the necessary loans in order to reach 47%, which would outstrip the combined 46% of the three other directors with the old man. He has secured the last piece to this puzzle that very night, ready to send his right-hand man, Kawanashi (Tatsuya Mihashi), to Osaka with a check for fifty-million yen that very night.

Things suddenly turn south when Gondo receives a call from a mysterious young man proclaiming that he has kidnapped Gondo’s son. It’s quickly discovered that the kidnapper had taken the wrong child, instead picking up the young son, Shinichi (Masahiko Shimizu), of Gondo’s driver, Aoki (Yutaka Sada). This changes nothing of the kidnapper’s plans, though. He has a child, and he’s going to get thirty-million yen from Gonda no matter what. So begins Gondo’s moral dilemma. It’s not his son. It is his money. He’s on the verge of taking control of his company to follow through on his own vision for how it should be run. Does he have a moral responsibility to not only spend a fortune saving a child who is not his but to also destroy his own professional, and potentially personal, life?

He calls the police, and so begins the police procedural element. However, it doesn’t take over just yet. The first hour of this film takes place almost entirely in the single large living room of Gondo’s high rise house, overlooking the slums of Tokyo below. It becomes obvious that phone calls are coming from below in the slums and that the kidnapper can see into the house. Hiding the presence of the police, headed by Inspector Tokura (Tatsuya Nakadai), Gondo works through his moral dilemma while Aoki remains mostly a background figure.

It’s been obvious from Kurosawa’s first film that one of his great strengths was his visual acumen, and High and Low represents an interesting challenge, a replication of his efforts in The Lower Depths. He’s constantly placing his camera in different parts of the room, filming sets of actors to fill the 2.35:1 widescreen frame, and nowhere is this more interesting than in the treatment of Aoki. About halfway through this long series of events in Gondo’s house, Aoki seemingly disappears from the conversation about his son, but he does not disappear from the frame. He’s often in the exact middle of the frame, cowering in the background as Gondo speaks with Tokura and the other policemen about what’s going on, and Aoki ends up just almost crawling out of frame.

Gondo’s goodness of character eventually wins out, and he organizes a drop to get Shinichi on an express train out of Tokyo. The police go along, but the kidnapper was smart and got him to make the exchange on the outside of the speeding train, leaving the money and forcing Gondo and the police to go back from the next station to pick up Shinichi, who is safe and sound. Gondo’s money is gone, his efforts to purchase National Shoe are over, and his creditors now need to be repaid.

This is where the police procedural completely takes over. With the child returned but Gondo on the verge of ruin, the police take up the cause of the man who paid a fortune to save another man’s child as a crusade, especially when the press get a taste of the story and trumpet Gondo as a hero that National Shoe, in its continued efforts to push him out, are treating maliciously. This combination of the intricate look at evidence from the phone calls, Shinichi’s memory, and the surrounding area with no one ever forgetting why they are doing what they are doing is what helps give the procedural elements a surprising emotional weight. It’s not just following the details of a hard to crack case, it’s following the details of a case that we are emotionally invested in.

And that case really is intricate. Small details from phone calls lead to a specific type of railcar. Shinichi’s memory leads to a specific seaside town where he was kept. A stolen car leads to a fish market. A remote cabin leads to searches for heroin, and it all ends up leading to Ginjiro Takeuchi (Tsutomu Yamazaki), a medical intern. The capture of him is an extended pursuit sequence that is remarkably tense as it drags out with Ginjiro leading the police around Tokyo with the police wanting to pin as much as possible on him to give him the maximum sentence.

There are a couple of interesting things about Takeuchi that I want to mention. The first is that we’re introduced to him relatively early, right about the time that the exchange takes place. We see him, but we don’t really know anything about him. He never talks to himself about what he’s doing in order to give the audience a helping hand. He’s largely silent when he’s on screen. The other thing is that there’s a confrontation with Gondo that is the last scene in the film. Gondo has resigned himself to his new life of rebuilding from scratch, and he’s visiting Takeuchi in prison. The two end up being a mirror of each other to a certain degree, in much the same way that happened in Stray Dog. Gondo started his professional life as an apprentice in National Shoe, working hard over 30 years to get to the point where he could conceivably take complete control of the company. Takeuchi, in contrast, is a medical intern, similar to how Gondo began, and he harbored ill will against Gondo simply because he owned the house above the slum, leading to the kidnapping. He also insists on not explaining himself, an interesting contrast to movies like Drunken Angel or Ikiru where people gathered to discuss a character at the end.

What’s most interesting to me about the film overall is the mixture of film genres and how well Kurosawa pulls it off. The procedural really gets deep into the weeds of how police work operates, and Mifune disappears from the film for over an hour. And yet, it never feels disconnected from what came before it. It is a procedural enhanced by the strong character work that started the film, leading to a surprisingly quiet denouement, anchored by a small and intricate performance by Mifune.

This is another example of primo entertainment from Kurosawa. Penetrating deeply into the minds of characters while telling an intricate story at the same time, High and Low is one of Kurosawa’s best films.

5 thoughts on “High and Low”