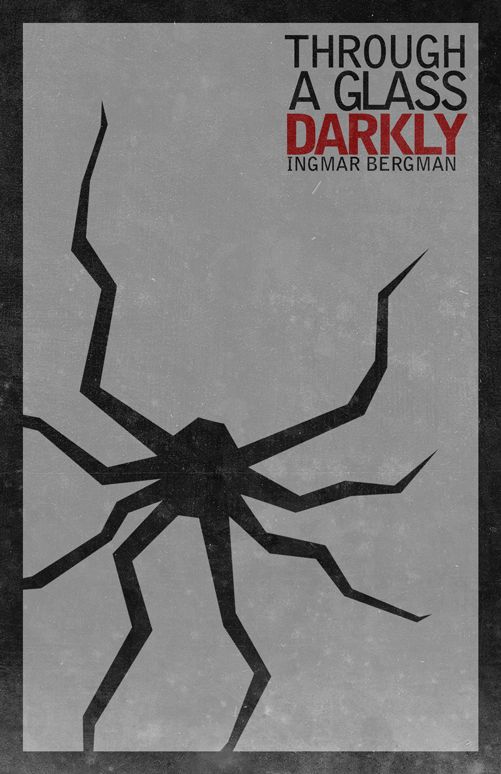 #10 in my Ranking of Bergman’s Best Films.

What do you do with a movie that is intentionally banal for its first half hour or so? Do you turn it off because you have better things to do with your time than to watch a family bicker about who’s going to get the fish nets and who’s going to set the table for dinner? It’s all done lightly and in a friendly manner, but, still, it seems to be about nothing. If watching casually, it can feel like the setup to nothing, but watching closely and it becomes evident that there are very dangerous undercurrents.

There are four members to this family, the patriarch (David), his son (Minus), his daughter (Karin), and the daughter’s husband (Martin). We see a play put on by the youngest three for the novelist father about the pointlessness of art. It’s an innocent jibe at the father, but he obviously takes it seriously. There’s talk of Karin’s sickness that she may be over, but it’s doubtful. We hear that Martin and Karin haven’t been intimate since her sickness, while Karin teases Martin in a way that carries obvious sexual undertones.

Our first view of the family, coming in from the water to the shore of their island, practically hand in hand, and talking joyously, begins to feel like artifice within the first half hour. The biggest driver for this break is Karin’s illness, a never named mental condition that’s most likely some form of schizophrenia or possibly a dissociative disorder. She wakes early in the Swedish morning before anyone else, goes up the stairs of their two-story vacation home, into a worn down room and begins to see things that entrance and terrify her. Her spell passes and she seems new and innocent again.

When Martin and David take their boat to go into town, that leaves Karin and Minus alone. Karin shows Minus the room and describes what she sees. It’s a room full of people waiting for a door to open and reveal someone, she believes it to be God. They end up isolated in a wrecked ship on the coast in a downpour with heavy implications of an act of incest. While this small adventure is going on, we find the reason the David has taken curiously unemotional notes in his diary about Karin’s illness. He’s so detached from her that he sees her descent into madness as an opportunity to collect material for a new novel.

This family is messed up.

The movie comes to a head with its most famous scene. Karin returns to the upper room, tailed by the other three members of the family, where she sees the culmination of her vision. The invisible masses are there as the door opens (both literally a closet door and in her mind) and in walks the somebody. She freaks out (it might be the best performance of a freak out I’ve ever seen, Harriet Anderson is a very good actress and Bergman was great with actors), and when she calms down she describes what she saw. It was God in the form of a spider. It tried and failed to penetrate her and then crawled over her to come to the wall.

Bergman had always struggled with his faith. The iconography of The Seventh Seal is probably the most visceral manifestation of this, but I believe that Through a Glass Darkly is the most potent dramatically. The description of the masses in the room are a vicious attack on organized religion, and the image of God as a spider is just as potent. It portrays God as either a malevolent force, or a natural and uncaring one.

Bergman tried to counterpoint that image by evoking the Book of John as David explains to Minus that God is love in all love’s forms, but it feels empty in comparison to the strength of Karin’s experience. It feels like Bergman trying to square the circle of his extreme doubt and his need for God at the same time, and the doubt is winning.

Through a Glass Darkly is a great film that takes time to build. I imagine the struggles of its first audiences, because the movie is actually a pretty hard watch the first time through. I have seen the movie before, but it’s been about ten years and I didn’t remember a single thing. I ended up reading several things about the movie afterwards (the essay from the Criterion’s massive book that came with the collection and Roger Ebert’s Great Movie essay on the film) to help me get a stronger grasp of what it is that I had seen. I’m not parroting what I read. I knew I loved the film, but I couldn’t quite explain why, so let me boil it down.

I see Through the Glass Darkly and Alien in a similar light. They both begin in the mundane and end with a tour de force that shakes the audience in different ways. I loved it thoroughly.

3 thoughts on “Through a Glass Darkly”