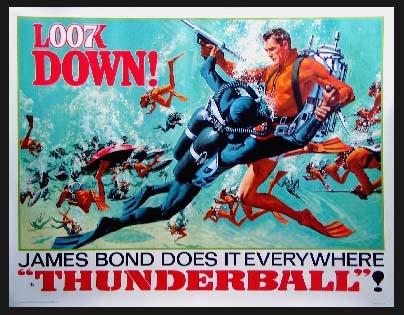 #20 in my Ranking of the James Bond Franchise.

The first word that comes to mind when thinking of Sean Connery’s fourth outing as James Bond is “tedious”. The second word is “frantic”. That’s a really odd combination, but Thunderball manages to pull it off. This is what I would call the first outright failure of the Bond films.

It’s also the first that’s explicitly built around a gimmick. That gimmick is, of course, its underwater action scenes. Looking up the posters of the film for this post, I was struck at how even those blared on about the daring new location for Bond to take the action to, but the problem is that underwater actions scenes aren’t…well…they aren’t terribly exciting. There are two main problems with them. The first is that we generally can’t see anyone’s faces (there are a handful of exceptions) so it can be hard to tell who’s doing what to whom (though the film does find ways around it from time to time). This can also deaden any expected emotional impact because we’re robbed of the most efficient of human communication tools, the human face. The second problem is that people really just move slower when trying to push through water instead of air. This slows the basic actions of the action scene down to a crawl.

Not to say that they’re unsuccessful completely but that they operate at a handicap that they never quite overcome. The final confrontation between SPECTRE operatives and Navy SEALS gets it right from time to time, but it just compounds the cannon fodder problem of action scenes by building one extra barrier between us and the people involved.

So, I wasn’t impressed with the underwater sequences, but there’s a whole adventure to be had. Surely it’s up to the Bond standards established by the previous three films. The sad fact is that Thunderball feels like it was written by someone who had no understanding of what made Goldfinger and From Russia with Love really good, but they definitely knew the hallmarks. We get Bond girls (four of ‘em), SPECTRE (represented by Emilio Largo, the least interesting antagonist since Doctor No), and a plot about stolen nuclear bombs being used for blackmail (that plays out slowly, then quickly, then slowly again).

The movie’s overstuffed and undercooked all at once. The story doesn’t even really begin until about fifty minutes in. Bond just happens to be in the same health spa in Southern England as a SPECTRE agent that is going to replace a NATO colonel in order to steal the bombs, but most of Bond’s time spent in the spa isn’t investigating SPECTRE but being really, really sexually aggressive with his nurse. The other bulk of this opening is the theft of the nuclear weapons told in excruciating detail. We get the NATO officer making love to his secretary, how the secretary is actually a SPECTRE agent, the double that kills the officer and replaces him, the gadget’s he’ll use, his trying to extort SPECTRE out of more money, the briefing he attends, the climbing into the airplane, the theft of the airplane, the setting down of the plane into the sea, the sinking of the plane to the bottom, SPECTRE arriving in a submarine, the killing of the double, the theft of the plane, and finally the hiding of the plane. There’s no reason to show us all of those steps, especially when they don’t directly involve Bond and barely involve the antagonist.

The four Bond girls are another problem. The first is the nurse, and she should have just been cut completely. She provides nothing to the narrative. The second is a British agent in Nassau who looks a whole lot like the third Bond girl, the sister of the NATO officer. The fourth is the antagonist’s henchwoman (one of several henchpeople he has hanging around him). When the British agent gets captured and murdered, I actually thought it was the sister of the NATO officer for several minutes.

It’s just bursting at the seams with the elements of a Bond movie, but it’s so poorly assembled that it diverts itself with non-story (even non-action) elements for long stretches. The action itself is largely a letdown since it’s reliant on a gimmick that undermines basic action filmmaking. Even Sean Connery doesn’t seem as interested in the role as he had been. It’s a slog of a film, and I find it, well, tedious.