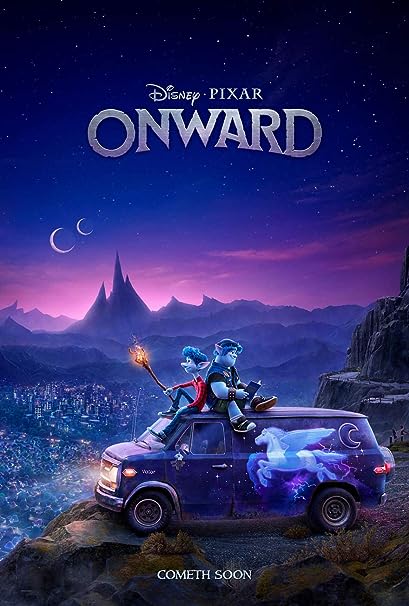 Pixar’s fantasy adventure actually has two themes running through it, and they’re pretty contradictory. Which I find interesting. On the one hand you have the story of a teenager discovering that what’s important is what’s in front of him. On the other you have the story of a world trying to reclaim what its lost. Up until the final moments, the two seem to be heading to similar places, but then they diverge rather quickly.

From what I’ve read, the story of two brothers trying to reconstitute their dead father was always the story, it just changed through development. At first, it was a more science-like story with Frankenstein overtones as the two tried to rebuild the dead father from parts, but they abandoned it for an idea they had of a fantasy world gone modern. I just don’t think they quite reconciled the core story that was always there with the details of the world that they populated around it.

So, Ian and Barley are the brothers and Ian turns sixteen. Their mother hands them a present from their father, which he had dictated should be given once both had reached sixteen. It’s a wizard’s staff, a remnant of the world’s past when magic was ever-present, since abandoned because of the relative ease of technology versus the execution of magic. Along with the staff is a spell to bring their dad back for a single day, a powerful spell that Ian loses control of halfway through, conjuring their father from the waist down. So begins the quest to find another MacGuffin so that Ian can complete the spell and visit with their dad.

The story gets really bogged down in the details of the world, though, for first half or so. When I started this review by saying there are two contradictory themes going on, I didn’t only mean their messages, but the two actually end up feeling like separate stories going on at the same time. This difference is probably most apparent when Ian, Barley, and their dad’s legs come across a biker gang of fairies. It doesn’t help that the biker gang toss up is a pretty cliched element of road pictures, but the fairies end up personifying this other theme almost exclusively. You see, the fairies, at some point between the invention of the lightbulb and that day, had collectively lost the ability to fly. A shrunken Barley, after a mishap of magic at the hands of Ian, goes on about how fairies should fly like in the olden days, days he wishes he could have lived in himself. Long after the fairies part ways with the brothers, they show up flying, having re-embraced flying, that which they had lost. This gets manifested in a couple of other ways, mostly with the Manticore, the winged creature that points Ian and Barley to the MacGuffin at her inn, and it’s a fine idea. However, it ends up contradicting the emotional journey that Ian goes through.

Ian and Barley follow the model of Barley’s Dungeons and Dragons inspired game (which, in this world, is based on history and fact) and find the Manticore. She no longer guides people on quests but manages her family themed restaurant of an inn. How she could have led people on quests in this world at any point in her life raises questions about timelines that the movie isn’t interested in addressing because it’s honestly not that important, but the questions still get raised. (Is she hundreds of years old? Did the world turn modern really quickly? If so, then how is magic treated like ancient history at the same time?) She guides them to Raven’s Point which is a series of large raven statues leading them to the MacGuffin’s location.

What matters is less the specifics of the quest and more the budding relationship of the two brothers, and this is where the movie shines. Ian starts the movie embarrassed by Barley, who is several years older and seems to have no prospects beyond the confines of his gaming board, but the quest thrusts them together on the road in Barley’s old van. Ian grows to appreciate Barley’s virtues, including the virtues of his game (based on history) that teaches Ian spells and a new way to look at the world through history. The ultimate lesson that Ian learns, when time has run out and there’s only a few seconds left for their father to appear, is that while Ian may never have known their dad, Barley did, and Barley never got to say goodbye. Ian learns to let go of the past he never knew in order to give Barley closure on the past that he did know. This is exactly the opposite of the other theme in the movie of the fairies learning to fly like their ancestors did.

The movie’s messy, especially in its first half, but the core of the movie works really well. Ian learning the value of Barley is wonderful. The fact that we are seeing the events through Ian’s eyes and we never see his dad up close is great. I love that it maintains that perspective discipline while being able to deliver an emotionally satisfying denouement at the same time. I also really like the look of the world, providing the mix of old and new in convincing ways from the ruined fountain outside the modern school to the new visual take on a dragon at the end. There’s so much to like in this film, but I just wish it had more narrative discipline.