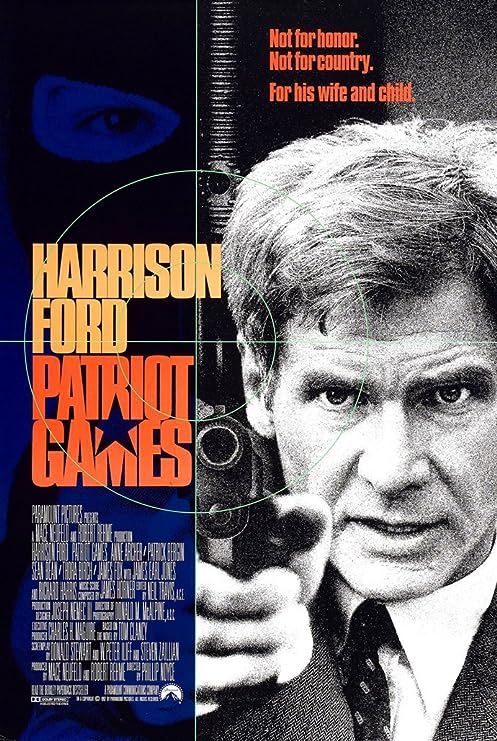 I don’t really like comparing movies directly, since there’s an implication that if one did X than the other should also do X in order to be good simply because the first movie did X. However, I do think that comparisons can be helpful in highlighting how one movie fails to engage as well as it could. Patriot Games is the sequel to The Hunt for Red October, and they both purport to be thrillers, but the second movie in the franchise doesn’t work nearly as well as the first. It’s not bad, but it just doesn’t thrill as much as it could, and highlighting the differences in structure between the two could be illuminating.

So, Jack Ryan has retired from the CIA and is giving a guest lecture in London at the Royal Naval College when he intervenes in an IRA attack on the royal family, killing a couple of the terrorists, and creating a desire for vengeance in one of the survivors, Sean Miller, whose younger brother Ryan killed. This takes up the first major chunk of the film, and it’s quite well handled. You see, the problems with this movie aren’t in the individual parts, but in how they’re assembled because once Ryan has testified at Sean Miller’s trial and gone back to America, the movie, instead of continuing to build tension around what Sean Miller is going to do to get vengeance, stops for a while as Ryan settles back into his life in Maryland, preparing for his classes as a history professor for the next semester. It takes some time for the IRA offshoot to free Sean from captivity.

But even then, once Sean gets broken out of the transport van (in another well handled tense action sequence that works quite well on its own), the movie settles back in to Ryan receiving word of Sean’s escape and then going on with his daily life, including receiving a jokey away from his friend Robby in class. The next time we see Sean, he’s on a boat headed towards North Africa with the rest of his IRA offshoot buddies as his commander tells him to forget about Jack Ryan and focus on building themselves up as an army. But then, the very next scene we see Sean in, he’s in Maryland with several others from the IRA targeting Jack Ryan and his family. We do get a one line explanation afterwards from his commander saying that he let Sean go to America after Ryan, but it still feels like there’s something missing between Sean in the ship to North Africa and Sean in a car outside Jack’s daughter’s school in Maryland.

And, again, the scene of the IRA encircling Jack and his family in two separate locations is really well done, tense, and exciting. I just don’t see how it follows from what came before it. When Sean ends up actually showing up at the terrorist training camp in North Africa, having not heard that Jack’s family survived his hit, he wants to leave again. And then the movie kind of comes to a stop again. Jack has to research and justify which camp the CIA knows about in North Africa to get a hit on it. Okay, I said I was done talking about The Hunt for Red October, but I guess I lied. This sequence where Jack figures out where to target is reminiscent of the scene with the Joint Chiefs and the National Security Advisor in the White House basement in Red October, but they’re handled very differently. In the previous film, Jack figures everything out internally, giving small clues as he works through it, as an argument breaks out around him about how to kill someone, increasing the tension until he breaks it with his explanation. In Patriot Games, he wanders around the CIA offices, getting flashbacks to a couple of points in the film previously, without anything else to help ratchet up the tension. It feels surprisingly lifeless. And then we get the sequence where Jack watches the British SAS from satellite footage attack the camp, after finally justifying it to himself and Admiral Greer. That attack sequence is really good, but it just came after an extended period of surprising lifelessness from the film.

The final big sequence is over the top, especially when Jack takes the boat on the water into a storm to drive the IRA away from his family and the visiting royal from his house, but it’s handled well enough to work.

I think part of the problem with the film is that it tries to encompass too much of the book, which I read once about 15 years ago and remember almost nothing of. However, the movie is rife with examples of an unwillingness to cut from the larger story to find the heart of it. I think they should have largely cut the IRA from the film, not completely, and turned Sean Miller into more of a one man vengeance machine against Ryan. The quest to justify the attack on a terrorist training camp as the movie should be ramping up instead of down really kills the momentum. The center of this story is really Sean Miller’s search for vengeance, not a weird pseudo-view of the Troubles that doesn’t really address any of the issues at hand. That can be more fully and effectively handled in a book of several hundred pages than a two-hour feature film. As a two-hour feature, it can’t be about getting all the sequences you loved from the book, but about what makes the story in its shortened version work.

So, the individual pieces are actually quite fun, but it’s the connective tissue between them that leaves me scratching my head most of the time.