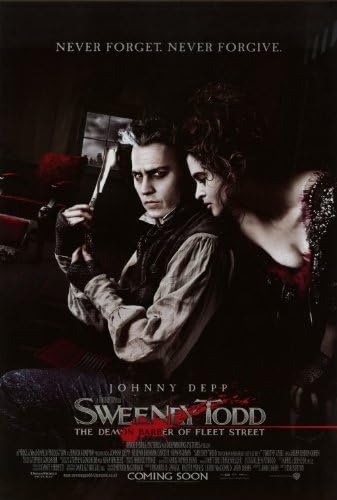 I absolutely love this movie in all its macabre glory. I love Sondheim’s music. I love the look of the film from costumes to set design to the special effects. I love the performances. I love the story. I love how everything weaves together in a complete package. And, on top of it, while the movie seems to wallow in nihilism, it actually ends up being a rebuke of nihilism as empty and self-destructive, which is a nice bit of irony to top it all off.

Benjamin Barker was a naïve young barber with an attractive and virtuous wife and a young daughter. The evil Judge Turpin coveted Lucy Barker, threw Benjamin in prison and sent to Australia, and took on Johanna, the daughter as his ward when Lucy refused his advances. Fifteen years later, Barker arrives back in London with a new, darker look and a new name, Sweeney Todd, with a single objective: revenge.

If I had to boil down the central point of this story to a single word, it would be corruption. Corruption of purpose, of the law, and, most importantly, the soul. There are very few innocents in this depiction of 19th century London, and those few left are attacked mercilessly until they break or are corrupted themselves. The central figure, Sweeney Todd himself, describes his former self as an innocent before the corrupt Judge Turpin threw him in jail, the experience of which corrupted him. Todd’s singular purpose of vengeance blinds him to everything else around him. He barely sees the baker Mrs. Lovett, unless she’s helping him in his quest. The only people he seems to have a clear eye towards are those who can help him or those who are impeding him. Turpin and his manservant Beadle Bamford are his main focus. The carnival barker of a barber Adolfo Pirelli goes from a way to attract attention to an impediment that must be dealt with. Even his daughter, the young woman he hasn’t seen she was a babe, means nothing to him. She is just another tool in getting Judge Turpin to sit in Todd’s chair for a very close shave.

So, our main character wallows completely in vengeance with no view of anything else, but what does it bring him and does the movie itself approve? First of all, his thirst for blood is most completely described in the number “Try a Little Priest” where, after being thwarted in his quest by Turpin leaving his shop, Todd commiserates with Mrs. Lovett and they both come up with a mutually beneficial solution. He can take his anger out on London and humanity by killing men left and right, and she’ll have meat for her meat pies, pulling herself out of the situation of making the worst pies in London. They’re both nearly giddy with the prospect of killing all types of people, no matter their station or vocation, but the very next number is of Todd slicing all of these throats and the music isn’t nearly as joyful. It’s actually a lament for his lost daughter where an interesting set of contrasts play out at the same time. The first is between Todd’s actions and his words. He’s bemoaning the loss of his little girl while killing people. The other is that it’s actually a duet with Anthony, the young idealist who came off the boat with Todd who has fallen in love with Johanna after a single sighting and who is actually trolling the streets of London looking for her. What would make Todd happy at this time? The blood that spurts all over him does nothing to him, he barely feels it, but he says he yearns for this lost daughter. And yet, he never makes a single move himself to find her, free her, or reunite with her. He’s so corrupted that he won’t actually do anything to try and help her.

The anti-Todd in the film is little Tobias, a young urchin that formerly worked for the Italian Pirelli. He’s wide-eyed, naïve, and eager to help Mrs. Lovett who, after the mysterious disappearance of Pirelli, took him in and saved him from another stint in the workhouse. He’s blind to the evil going on around him, but he begins to sense that something is wrong, mostly emanating from Todd, a feeling that he confides with Mrs. Lovett. The irony is, of course, that Mrs. Lovett did more to direct Todd’s evil outward that Todd did himself, so Tobias is caught in a trap. The resolution of the film, where Todd bares his neck for the child he knows stands behind him, is the exact right ending for both characters. Todd, realizing how blind he had been as he holds his wife’s dead body in his arms, gives up everything, and Tobias takes the razor across his former master’s throat, ending and evil rein of terror.

What really helps carry the movie all the way through is Steven Sondheim’s music. From “No Place Like London” to “Final Scene” the music is literate, witty, and adept. It’s all very good music, so to say. Johnny Depp and Helena Bonham Carter land somewhere between fine and subjects of nepotism in their renditions, but the rest are very good, mostly because most of the rest have been pulled from the actual musical world. The numbers are staged on a very small visual scale, usually a person or two in a small room and only occasionally breaking out of that paradigm (like when Todd moves around the streets unseen by anyone in “Epiphany”). I think it helps the film that there’s no dancing or large numbers, helping us focus more tightly on the characters as though the songs were just extensions of dialogue rather than excuses to show off musical skill.

I do not think that Tim Burton has made a better film. The look of the film, the sound of it, the execution of every scene is damn near perfect. It’s one of those movies where director and material matched up perfectly to bring out the best in both. I absolutely love this film.

1 thought on “Sweeney Todd: The Demon Barber of Fleet Street”