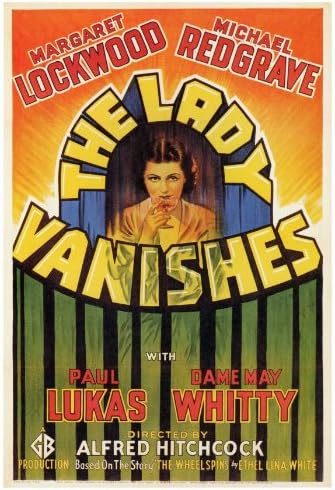 #21 in my Ranking of Alfred Hitchcock’s films.

There are those who really love The Lady Vanishes, often calling it one of Hitchcock’s best, and while I do enjoy it, I’ve never quite understood that level of appreciation for this light mystery. It’s certainly well constructed and fun, but it ultimately feels like shallow amusement.

The movie’s direction is obvious from the beginning as we zoom into an inn at a railroad crossing where a bevy of characters are waiting for the night to pass, the tracks to clear from the avalanche, and to continue their journey out of the small, fictional Central European country. We see first and foremost a pair of Englishmen who are concerned (in 1938) of the state of England, only for us to find out amusingly enough that their concern is for the English cricket league results. We also meet kindly old Miss Froy, an English governess, Iris Henderson, a wealthy young woman off to finish her world traveling and marry a man back in London, and Gilbert, a clarinet player writing a book on folk music. How the different English people interact with the cricket lovers barreling around senselessly, Miss Froy gently explaining things, and Iris and Gilbert getting into an argument about the noise he’s making in his room above hers, is all handled nicely and well, giving us a clear view of the main characters who will drive the plot forward once we get onto the train.

The train moves the next day right after Iris gets a bump on the head from a falling plant meant for Miss Froy who stays with her and tries to comfort her. After a quick nap, Iris awakens and finds Miss Froy missing and no one around her will acknowledge that Miss Froy even existed. The only person who seems receptive to her is Gilbert, the cad who wouldn’t let her sleep the night before. Together, they run around the train, asking questions, looking for clues, and moving between believing Miss Froy was a figment of Iris’ imagination and that she was surely real.

Now, all of this is certainly amusing and charming, especially when thinking of the two leads and the mystery actually does have clues to follow and guess along with the characters in the middle of it. However, this is my third time watching it and I still can’t do more than enjoy the light mystery for all that it is. It’s weird to have an apologia in a review of something I do like, but the opinion around The Lady Vanishes is something that I don’t quite understand. It’s entertaining and fun, but I don’t get swept up in the adventure like many other people seem to do. The characters are likeable, the mystery mysterious, and the resolution satisfactory, of course.

Hitchcock does well in keeping the small set interesting as the characters move from one of three cars to another without ever feeling like the movie’s set bound. The use of motion to keep the sets look like their moving helps sells the reality, a surely challenging task in the mid-30s.

It’s well-built and a good ride through Europe. I enjoy it every time I watch it.

2 thoughts on “The Lady Vanishes”