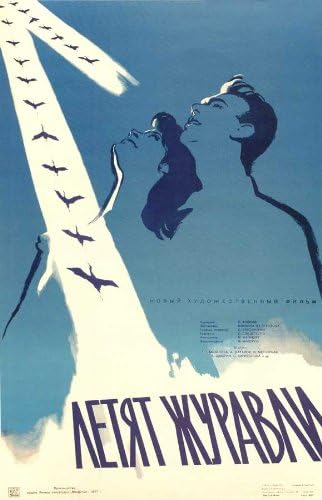 The cultural thaw after Stalin’s death really did do wonderful things to the Soviet film industry. Everyone still operated in an effective prison with the threat of punishment from the secret police, but at least filmmakers were allowed greater latitude in what they could dramatize. Suddenly, it wasn’t just happy peasants and the new Socialist man, but filmmakers were allowed to show the kind of suffering that people experienced in paradise. The Cranes are Flying is one of those first films after the thaw that showed some of the seedier side of the Russian experience in World War II including profiteering and draft dodging. In addition, the director, Mikhail Kalatozov, and cinematographer, Sergey Urusevskiy, used a roving, handheld camera that few productions had tried. That’s the film from a historical perspective, and it’s interesting unto itself. However, the movie is just so much more. It’s truly something special.

The film is the story of Veronika, a young woman in love with a young man in the days leading up to the explosion of war. They’re endearingly in love, using their meager means to plan a wedding. However, the young Boris is a man dedicated to his nation, and when war breaks out he signs up without telling anyone, saving the reveal for the afternoon that he’s due to report for duty. He buys a small squirrel doll for Veronika, hides a message in the little basket it’s holding under some acorns, and can’t quite give it to Veronika who’s been held up for his goodbye party. She pursues him, but he never sees her in the crowd that’s wishing them off.

Sometime later, Veronika’s mother and father die in a bombing raid and she moves into Boris’ parents house where Boris’ sister and cousin, Mark who falls in love with Veronika and convinces her through strong arming and the lack of communication from Boris to marry him. Meanwhile, Boris is at the front and gets shot, but no word ever travels back to Veronika who must retreat to Siberia where she lives a miserable existence with the unfaithful and unloving Mark.

What makes the movie truly special is the character of Veronika. She’s so impeccably written and performed by Tatiana Samoilova that she carries the entire emotional weight of the film. Her initial happiness falls to depression and anger before finally finding a way to discover some solace in her situation. It’s a personal journey of pain that we are along with the entire time. Her desperation to hold onto any scrap of physical reality and hope that Boris is still alive is palpable from the moment she struggles to find him in the crowd to the moment late in the film that mirrors it when she’s looking through another crowd at the end of the war for him. We know little more than she does. We’ve been told the same things she’s heard, and yet we’re still holding out hope for her. When the truth comes crashing down on her, she’s holding a bunch of flowers and suddenly doesn’t know what to do with them, choosing to hand them out to those around her who are happier than her. I cried, quite literally, as Veronika walked through that crowd, hiding her pain and trying to take part in the joy surrounding her.

And all of that emotion that swells at the end is all because of the work put into Veronika as a character, her hopes and her pain, in the preceding ninety minutes. The camera that flies with her in the opening, in her happiest moments, that tracks her as she and Boris search for each other in the crowd, and that stays still and focused on her in her darkest moments in Siberia like when her uncle-in-law, trying to help an emotionally distraught injured soldier, damns all women who don’t stay loyal to their sweethearts with Veronika wilting away in the background of the shot, is used to sell her emotional state at every stage of her journey. On the technical side, the handheld camera’s movements are amazingly smooth, feeling almost like they used a Steadicam two decades before its invention.

There’s true greatness here, and I think this might vie for the best Soviet film made along with Tarkovsky’s Andrei Rublev and Elem Klimov’s Come and See. It’s both big and small, dealing with the death of millions by focusing on the death of one man and the woman he left behind. I adore this film.

2 thoughts on “The Cranes are Flying”